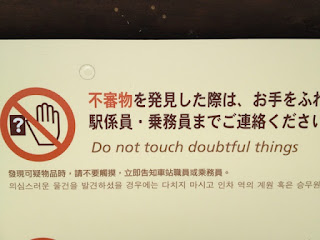 There are hardly any tourists here. Earthquake fears maybe? They are missing out.

Much of the food we have eaten confirms that those Wagamama-style noodles are pretty close to being authentic. Ditto with those Satsuma-style Bento boxes.

Lots of white mouth masks worn here. In the streets, transport, shops and by people serving you. We were told that generally they are worn by people with colds to stop them spreading their germs rather than by paranoid disease-fearing idiots. If true what a good idea.

No litter. Seriously, no litter. Or dirt. Or dust. Anywhere. We caught a shop keeper on her hands and knees cleaning the pavement outside her shop with what looked like a toothbrush. Oh and no graffiti.

Unbelievably we found ourselves in an oldie-stylee Tempura restaurant last week. Having rashly stated to Stuey only the other day that I'd never been to a fish restaurant anywhere in the world that didn't have something non-fishy on the menu that night I was proven wrong. We had course after course of fish. What fresh circle of ichthyoid hell is this? Tiger prawns, cuttlefish, conger eel, oh yes and more prawns. (shudder). I was throwing it up later that night.

Bullet trains are fucking fast. Like an aircraft bombing down a runway you almost feel you are about to take flight. It's disorienting to try and look out of the window as the world is flying by so fast.

It is a country of the very old and the very young. Both groups seems to be worshipped.

When it's raining in Tokyo it's Blade Runner. When it's sunny it's a Nintendo video game.

On the trains and overground there are frequent announcements, "Please switch off your mobile when near Priority Seats and in other areas switch to silent mode and refrain from talking on it"

Cycling - which takes place on the pavement - is haphazard. Amazing how there aren't more crashes.

The people on the underground are utterly silent. Packed in but silent. And no eye contact.

Bowing is the norm.

Giving somebody something - anything - is done with both hands palms up.

At pelican crossings no one 'jay walks' and the little red man has little red lights that count you down letting you know how long you have to wait before he turns green. Nice.

Japanese women are on the whole stunningly beautiful.

When it rains most people sport transparent umbrellas so they can see other people and not bump into them. How considerate.

No sign of Mothra. Godzilla also conspicuous by his absence.
Posted by overyourhead at Friday, March 09, 2012