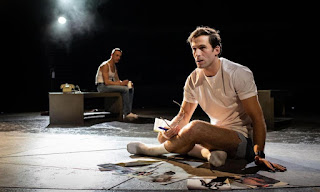 Starring Ben Daniels, Liz Carr and Luke Norris and directed by Dominic Cooke, the production, staged in part celebration of the play's 35th anniversary, took on an enhanced, timely pertinence given Kramer's death in 2020 of pneumonia and recent Covid-19 events.

The play focuses on the rise of the HIV/AIDS epidemic in New York City between 1981 and 1984. A new virus is infecting gay men across New York City. As the rising death toll is ignored by government and the medical establishment, fear and confusion turns to rage and division.

Using this anger, writer and activist Ned Weeks (avatar of Larry Kramer) sets out to unite the community in their fight for recognition and right to survive.

Weeks character says something profound at one point; “We are living a war while they are living in peace-time.”

Weeks prefers loud public confrontations to the calmer, more private strategies favoured by his associates, friends, and closeted lover Felix Turner. Their differences of opinion lead to frequent arguments that threaten to undermine their mutual goal.

It is a very powerful piece with very powerful performances written, as it was, during the heat of the battle. There are clear parallels with the response to the Covid pandemic.
Posted by overyourhead at Thursday, November 04, 2021