Doctor Who Series 13 "Chapter One: The Halloween Apocalypse"...

Wow! Doctor Who Series 13 "Chapter One: The Halloween Apocalypse" last night was completely amazing. The first of a six-parter and it didn’t let up from start to finish. It was like a season finale. They must have spent a fortune on special FX. Horror, action, lots of baddies, busy, chaotic, lots of comic relief, and a man in dog suit. Really looking forward to the rest of it now.

Escaping captivity, Swarm confronts the Doctor through a psychic connection. He claims they have an antagonistic history which the Doctor doesn’t remember. The Doctor and Yaz track down Karvinista, one of a dog-like species, questioning why he has kidnapped a seemingly insignificant human, Dan Lewis, and why his species is sending a battalion of ships to Earth. Karvanista tells them that each of his species is bonded with a human; by taking humans, they are actually saving humanity from the impending destruction of the Flux, an unknown entity that defies all laws of space and time and destroys everything it comes across. The Doctor has Karvinista form a defensive shield with the other battalion ships around Earth, thus protecting it from the Flux. Unable to transport behind the shield, the Flux overtakes the TARDIS with the Doctor, Yaz, and Dan inside. 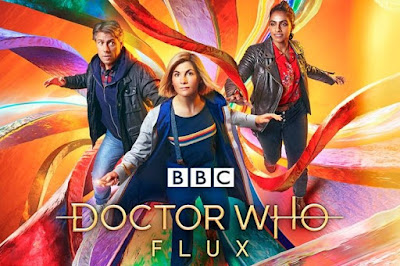 Posted by overyourhead at Monday, November 01, 2021