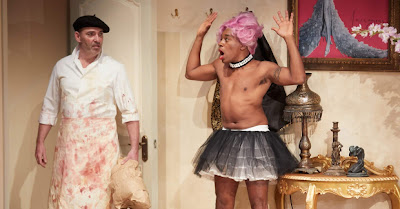 The adverts, the reviews and the publicity were very keen to point out to us that this was *THE PLAY* and *NOT THE MUSICAL* of La Cage aux Folles. Not that that mattered to us to be honest. The musical is great and all that but we'd be just as happy to see an English translation of a broad French gay farce as an American musical version of one.

We laughed a lot. Both the leads are well served by Simon Callow’s English translation and there is lots of fun to be had from the high camp and haute couture. Syrus Lowe steals the show as Jacob though, who is Georges and Albin's scantily clad, shrieking servant.

Dated though? Sure. Still funny? Yes. Rip-roaringly, gut-bustingly funny? Not quite. Some good moments. Some bitchy one liners. But if you do go and see it I'd strongly recommend having a few stiff ones first (<--- level of jokes in show!)
Posted by overyourhead at Tuesday, February 25, 2020