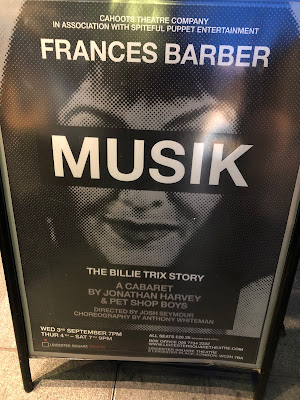 Starring Frances Barber, who starred as the same character Billie Trix in the first Pet Shop Boys musical “Closer to Heaven” almost two decades ago, it is a new solo show by the musical duo written with much aplomb by Jonathan Harvey.

Billie bursts onto the stage dressed all in black and wearing an elaborate purple fascinator. The character is shrouded in the droll, gleeful darkness of Bob Fosse’s Cabaret, a "little monster from hell."  The first song is "Mongrel" where we discover Trix was conceived in Berlin of 1945, her father an unknown soldier, as the Second World War crashed to a halt.

The piece then sees Trix claim an influential part in most of the cultural highlights of the past 75 years, in the form of a cabaret character comedy. She is our very own Zelig. A "zeitgeist for sore eyes."

Madonna, we are told, stole Billie’s trademark eyepatch; Andy Warhol made her change her name ('Hildegard' didn’t sound quite as rock and roll); Nico was “one German too many” for Warhol; Salvador Dali designed her a coffin after an overdose left her technically dead for days.

The second song "Soup" tells us how Warhol stole her idea to make soup as art. It is a comedy track which enthusiastically lists tinned varieties of Campbell’s.

Throughout it all, Barber is a magnetic performer, brash and husky, giving Trix just the right amount of lack of care for anything bar our approval; proudly declaring her largely drug-free status while chopping up a few lines on her tambourine, or dismissively giving birth to a child she didn’t even know she was expecting at Madison Square Garden. Mothers and daughters play a big part here, namely Billie’s loathing of each of hers.

The jokes are, I have to say, pretty good throughout.

When referring to the Pet Shop Boys and the famous divas they have worked with Trix spits bitterly, "Dusty stole my eyelashes, Liza my coke!"

The YBA scene caught her eye too - when she hung out with Damien Hirst and Tracey Emin in a phone box in the 1990s. And she has been courted by everyone, including Donald Trump, and no less a figure than Jean-Paul Sartre called her pretentious.

You get the picture.

The show contains four new songs and two that have seen the light of day before.

Fans will all recognise "Friendly Fire" although perhaps may be less familiar with Vietnam War song Run, Girl, Run which was released as a demo on "Release: Further Listening 2001–2004"

The other two songs in the show are the poundingly euphoric Eurodisco "Ich Bin Musik" with the finale of "For Every Moment" which offers us a grand reflection not just on Billie’s life but – with backdrop images of her youth blended with slides from the show – on Barber’s, too.

Great show. I can see drag queens performing it for years!

Posted by overyourhead at Friday, September 06, 2019