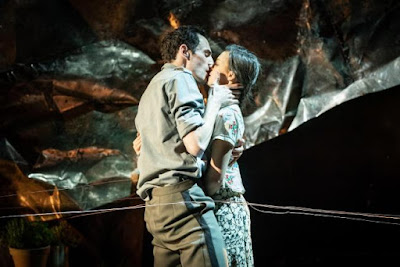 Louis de Bernières's Greek island epic about love across the barricades was such a phenomenon way back in 1994 that the book's blue-and-white cover is still instantly recognisable to many. But twenty-five years on, can this story of Second World War island occupation still enchant? Well, yes, mostly. Largely because Rona Munro's adaptation cuts back the love story to drum home the bloody trauma of conflict.

Life during wartime is tough in idyllic Cephalonia - a place that becomes both safe house and arena for the action. The allure of music is at the heart of this love-across-the-barricades yarn concerning doctor's daughter Pelagia and the eponymous Corelli, who heads up occupying Italian forces with an urbane reluctance and an artistic sensibility that reaches out beyond the uniform.

With Cephalonia sheltered from the blast of war, Pelagia tends to her goats, while her widowed father Iannis pees on the plants in-between tending to the poorly. Once the Italian army, move in, alas, with Pelagia's new squeeze Mandras already a casualty of one form or another, things can only get worse.

Played out against Mayou Trikerioti's set, dominated by a giant metal sheet onto which are projected the horrors of war, Melly Still's touring production that originated at the Rose Theatre, Kingston is an expansive and impressionistic affair. Its little choreographic flourishes running alongside Harry Blake's score give it an epic feel.

In terms of narrative thrust, its generational sprawl possesses the feel of a state of the nation mini-series, with the framing device of Corelli's comrade Carlo's letter lending a poignancy to proceedings.
The action starts with a gay love story between two Italian soldiers - giving the invading army a warm human touch. However, that human touch is set on fire by the appearance of Alex Mugnaioni's Corelli - a red hot Italian lover. Ultimately though, it is Madison Clare's vivid presence as Pelagia who carries the fifteen-strong ensemble throughout.

The first half drags a little as the action revs up, but things pick up in the second as love story takes a back seat, and the body count mounts.

At times Cephalonia resembles Shakespeare's stormy island in The Tempest, with Iannis a foppish Prospero figure, Pelagia a more Street-smart Miranda and Corelli a castaway charmer with musical magic at his fingertips to soothe even the Germans' fevered brow, for a while, at least.

It is another island-based Shakespeare play, however, that gives Bernieres' story its essence. As Pelagia and Corelli make belated music of their own, one can't help but will them to play on.

An enjoyable night out. If a little underpowered in the first act.
Posted by overyourhead at Tuesday, September 03, 2019