For Queen and Country @ Mirth, Marvel and Maud... 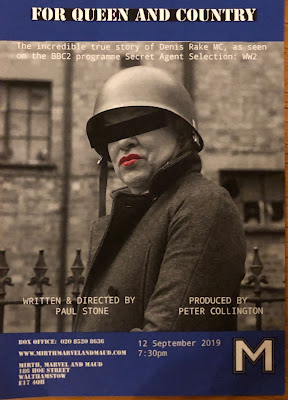 Last night I went to see For Queen and Country at the old Mirth, Marvel and Maud theatre space in London's glitzy Walthamstow.

The show is based upon the incredible (mostly) true story of a certain Major Denis Rake MC.

Rake was born in Belgium. His mother was an opera singer who very nearly abandoned him to a children's home, but a "friend" suggested putting him in the circus instead. Rake became a tumbler, then a waiter, and finally a chorus boy in the West End and touring shows in the 1920s. He had an affair with a British ambassador, then with a Greek prince. But in 1939 whilst performing in The Dancing Years at Drury Lane, he signed up for the war effort being a fluent French speaker. Despite being a casualty of a bombed merchant ship (twice!), he eventually found his efforts being appreciated by SOE (the super-secret spy Special Operations Executive).

While being trained for spy work, Rake refused to go on the assault course, handle explosives, or use a gun. He gossiped during deployment, he made a "fearful fuss" when he landed at Cannes rather than Juan-les-Pins and, when he is finally caught by the Germans, he believed his interrogator was "against him right from the very start". He lost two teeth and had his arm broken in three places for his backchat.

He escaped capture though and as an openly gay man, assumed the identity of a drag artist in Paris nightclubs whilst both performing to German troops and operating a wireless for the French resistance. His bravery and courage isn't in dispute. His war service speaks for itself, having been awarded the Military Cross, the Croix de Guerre avec Palme and made a Chevalier of the Légion d'Honneur.

After the war he later became Douglas Fairbanks Junior's butler (of all things). 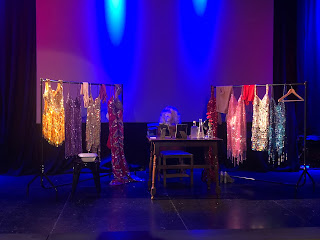 His recounting of some of his war "adventures" is, perhaps largely, open to question. But the quality of last night's play was not. It was great. A one hour, one man monologue show, we watched Rake, as a drag queen in a back stage room, getting dressed – readying himself to go on and give it his all. And as he does, he reminisces about his army career, his love life, and his military service in occupied France as a wireless operator.

The stories are moving, funny, and a real education. The show also uses war time songs with changed comedy lyrics to great effect.

The show should tour. It really should. It's great.

Posted by overyourhead at Friday, September 13, 2019