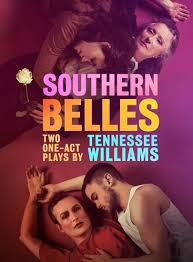 Presented together as Southern Belles as the headline production of the King's Head's 2019 Queer Season, the two plays were And Tell Sad Stories of the Deaths of Queens, and Something Unspoken, two rarely performed pieces by Tennessee Williams.

And Tell Sad Stories of the Deaths of Queens was never performed in Williams's lifetime, owing to its openly gay characters. Williams wrote the play in 1957, after his Broadway successes with Streetcar Named Desire and Cat on a Hot Tin Roof.

The play charts the heart-breaking encounter between an extraordinary drag queen Candy Delaney (Luke Mullins) and a troubled sailor Karl (George Fletcher) in 1950's New Orleans and explores the boundaries of love, passion and heartbreak. The strain of Candy’s longing is clearly visible in Mullins’ performance. Fletcher cuts an imposing figure as Karl: aggressive and manipulative on the outside, he lets Karl’s emotional turmoil shine through.

Something Unspoken was written in 1958 and debuted as part of a double bill with Suddenly, Last Summer. In this piece, tensions between a wealthy Southern spinster, Miss Cornelia Scott (Annabel Leventon), and Grace (Fiona Marr), her loyal secretary of 15 years, boil over in a confrontation that exposes their complex, unacknowledged and romantic yearning for each other.

The plays were both short - and very, very good. Tone-perfect, sultriness and sweaty unrequited sexuality simply oozed from the stage.
Posted by overyourhead at Tuesday, August 20, 2019