A Walk through Islington's Green Spaces... 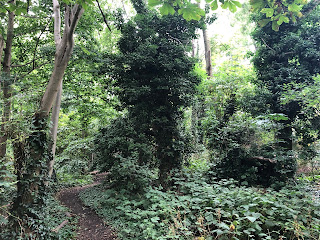 A couple of weeks ago Stuart and I took a walk around glitzy Islington - exploring many of the green spaces our lovely borough has to offer.

People often say that Islington has the fewest green spaces of any borough - but judging by what we saw it seems an unusual claim.Why, there's even a wild wood - Barnsbury Wood.

This walk explores some of Islington's many and varied squares and other garden spaces. The 18th-century village of Islington was once a hub of dairy farming, supplying much of London's milk. It was a place of healthy recreation for city-dwellers, with its clean air and the fresh water spas which developed around the New River, built in 1609 to 1613 to bring fresh water from Hertfordshire to London. In the early 19th century, as more houses were needed, country estates were broken up and the second wave of London's great network of residential garden squares took shape. 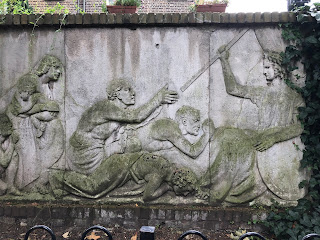 Compton Terrace Gardens
Compton Terrace was designed by Henry Leroux in 1805 as a row of villas either side of a Union Chapel, and completed in 1830. In 1823, a management committee was set up, and the 'paddock or grass plot' in front of the villas dressed as a 'pleasure ground'. The Union Chapel Congregational Church was built in 1876-77 by James Cubitt, replacing the earlier chapel of 1806. The terrace and gardens were part of the Marquess of Northampton's estate until the 1920s, when ownership passed to Islington Borough Council.

Canonbury Square
Laid out in 1800, Canonbury Square was the earliest of the Islington squares, and was also developed by Henry Leroux, together with Richard Laycock, on land owned by the Marquess of Northampton. The 4th Marquess of Northampton opened the square gardens to the public in 1884, and in 1888 it was conveyed to Islington Borough Council. The layout of the gardens changed in the 1950s, when it was described as 'London's most beautiful square' by the Evening Standard. The square is surrounded by reproduction railings, the originals having been lost during World War II. The planting was improved by Loire Valley Wines in 2006, with roses, lavender and a small vineyard at its centre. Famous former residents include writers Evelyn Waugh and George Orwell, and artists Duncan Grant and Vanessa Bell. 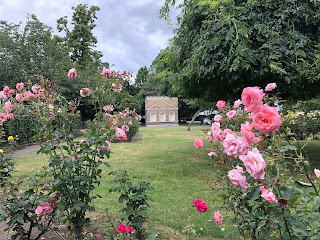 Battishill Street Gardens
The gardens were opened by poet laureate Sir John Betjeman in 1975. In the far corner is a paved area with seating, which features a stone frieze by Musgrove Watson, who also designed the bronze reliefs at the base of Nelson's Column in Trafalgar Square. The frieze was originally made for the Hall of Commerce in Threadneedle Street in 1842. To the north of the gardens is Waterloo Terrace, built on land which was once part of the botanic garden of Dr William Pitcairn, President of the Royal College of Physicians from 1775 to 1785.

Milner Square
Milner Square and Gibson Square (to the south) were part of the estate laid out from 1823 for Thomas Milner Gibson, who leased the land from the Lord of Barnsbury Manor, William Tufnell. Gibson was heir to a fortune made from plantations in Trinidad, and later became President of the Board of Trade. The original plan for 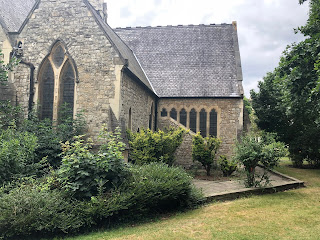 Milner Square by architect Francis Edwards was never carried out, but was replaced in 1839 with a neo-classical design by architects Roumieu and Gough. Some elements of the buildings were lost in the 1930s, with the removal of projecting porches and decorative ironwork, which blocked light into the basements of the houses, many of which had become flats. The square became run down and was restored as council housing by Islington Council in 1973.

Gibson Square
Gibson Square, the first of two squares built as part of the Milner Gibson Estate, was laid out from 1832 to 1839 by architect Francis Edwards, a pupil of Sir John Soane. The garden was originally open to residents only, but in the 1930s it had become rundown and was surrendered to Islington Council for upkeep. During WW2 the garden was dug up for air raid shelters and later replanted. In 1963, a proposed ventilation shaft for the new Victoria Line, in the form of a 50-foot concrete structure, was staunchly opposed by residents. This resulted in the simulated classical temple with domed roof which stands in the garden today, designed to be in harmony with its surroundings. The work was carried out in the early 1970s, when London Transport also restored the garden and replaced its railings. 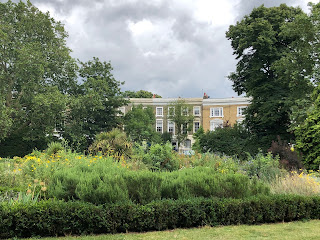 Cloudesley Square
Cloudesley Square was begun in 1825 by carpenter John Emmett, who leased land from the Cloudesley Estate and built along the Liverpool Road from 1824 to 1826. A hexagonal railed garden at the centre of the square surrounds Holy Trinity Church by Sir Charles Barry, built 1826-29, the third of his Islington churches. The square is named after 16th-century landowner Richard Cloudesley, who gave land to the church. The church's stained glass east window of 1828 shows Cloudesley kneeling. Holy Trinity was the district church until the 1850s, when it was replaced by St Andrew's at Thornhill Crescent. In 1980 it was leased by the Pentecostal Sect as the Celestial Church of Christ, at which time the railings were also restored.

Lonsdale Square
Lonsdale Square was built 1838–45 by Richard Cromwell Carpenter, surveyor to the Drapers' Company Estate. In 1690 the Drapers' Company had inherited the land, known as 'Gosseyfield' and once used to pen cattle on the way to Smithfield Market. Unlike most of Islington's squares, the garden remained private until the 1960s, when they were offered to Islington Borough Council for the nominal sum of £50. The railings, removed in WW2, were replaced in the early 1970s, when the garden was restored. 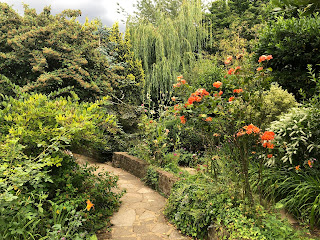 Thornhill Crescent
The Thornhill Estate was laid out by estate surveyor Joseph Kay and a number of speculative builders from 1846 to 1852 on land which had been mostly used for dairy farming. Thornhill Square, the largest square in Islington, dates from 1847. Early residents of the square were well-off professionals and the garden was originally private. The railings, which date from 1852, survived WW2, but the area had declined and in 1946 Captain Noel Thornhill gave the gardens to the council for public use. They were newly laid out in 1953 as part of Coronation Year improvements.

Barnsbury Wood
Barnsbury Wood is the smallest local nature reserve in London. The triangular area covered by the wood was originally the garden of St Andrew's Vicarage, at 7 Huntingdon Street, where George Thornhill lived. The vicarage became a private school, then flats, but from the early 20th century the garden was abandoned and became woodland. In 1977 a group of local residents campaigned to save the area from housing development. In 1981, the Barnsbury Wood Co-operative again fought to save the wood from development, and had it designated for educational purposes. In 1996, the wood was granted Local Nature Reserve status, and is the largest area of woodland in the borough.

Barnsbury Square
Barnsbury was a medieval manor, and a moated farm once stood on the site of the current square. The name is derived from that of Ralph de Berners, whose family owned the manor until the early 16th century. In the early 19th century, the lord of the manor, William Tufnell began to lease land for development to various speculative builders. The square was central to the Bishop Estate, developed from 1834 mainly by Thomas Whowell, who built and lived in Mountfort Crescent from 1841. The square gardens were laid out as 'ornamental pleasure grounds' for the private use of residents. In 1889 the Metropolitan Public Gardens Association (MPGA) purchased the lease and opened the gardens to the public, but ownership disputes after the lease expired in 1909 led to decline and damage over the next decade. The gardens were finally conveyed to Islington Council by deed poll in 1933, restored with funds from the MPGA and reopened to the public in 1934. It was redesigned in the 1960s and 70s with raised beds, a small pavilion and new railings.

Mountfort Crescent
Mountfort Crescent was built in 1834-47 as part of the Bishop Estate and comprises pairs of bow-fronted villas set around a central garden. It occupies the ground of what used to be Reed Moatfield, in which was a moated site, so described in 1756. It is named after Mountfort House. The architect John Carr McLellan lived at No. 3 from 1883 to 1888. In 1928 the garden was described as a 'small area enclosed by light railings owned by freeholders of surrounding houses, who maintain the garden.' The garden is no longer railed and has several notable trees.

Culpeper Community Garden
Named after the 17th-century herbalist Nicholas Culpeper, this secluded garden contains 46 different plots tended by local people and groups, growing a wealth of flowers, fruit and vegetables. There are also a communal lawn, ponds, rose pergola and wildlife areas. Open daily to the public, the project encourages the involvement of many disadvantaged groups, as well as children and young people.