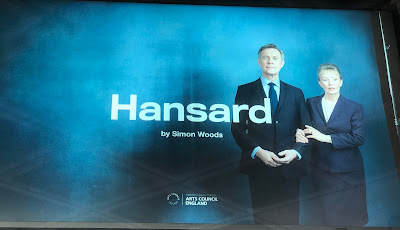 "Can we address the elephant in the room?"
"Which one? There's a herd of them."

Woods used to be an actor and this is his first play - and it's a corker. It's a two-hander with wall-to-wall zingers. And a tragic twist that had us in tears.

The 'Hansard' of the title refers to the official report of all UK parliamentary debates. Truths that are recorded for future reference. And the truths revealed here are devastating.

On the National Theatre web site, the play is described as 'touching and original' which does it a bit of a disservice. It is far more than 'touching' and not actually wholly original. But don't let that put you off.

It's a summer's morning in 1988 and Tory politician Robin Hesketh has returned home to the idyllic Cotswold house he shares with his left-leaning wife of 30 years, Diana. But all is not as blissful as it seems. Diana has a stinking hangover, a fox is destroying the garden, and secrets are being dug up all over the place. As the day draws on, what starts as gentle ribbing and the familiar rhythms of marital sparring quickly turns to blood-sport.

Starring two-time Olivier Award winners Lindsay Duncan (note-perfect) and Alex Jennings (excellent) the play evokes the marital viciousness of Who's Afraid of Virginia Woolf and the catty put-downs of The Boys in the Band.

The early wit of the piece soon metamorphoses though into a savage argument as Diana takes on her husband's support for the infamous Section 28 clause in the Local Government Act, in which the government of Margaret Thatcher attempted to ban teaching about the acceptability of homosexuality. That debate is remembered today as one of those moments when English society was asked to define itself, and when Tory politicians imposed a certain view of the values people should live by.

As an attack, and indeed a defence, of now the governing class thinks, it was simply a delight. And cynical as Hell.

"You Torys stay in power by telling us who we should be frightened of - foreigners, gays, travellers - and then offer us a solution to supress those very 'threats'. It's endless - you finding new groups of people to be your 'threats'."
"And?"

A great first play. I can't wait to see what Simon Woods does next.