The Last Temptation of Boris Johnson... 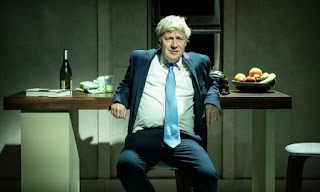 The play is in two parts. The first half takes place at a dinner party chez Johnson (played by Will Barton) in February 2016 when the host was pressed into making a decision, not least by Michael Gove, about his attitude to Europe. The jokes are luke-warm but amusing.

The play picks up in the second half though, which takes place in 2029. It would be a pity to spoil all the surprises but the hero, now presenting The Apprentice on television, is invited to stand for the fourth time as prime minister and secure Britain’s re-entry into Europe (or “Brentry” as it becomes known).

I particularly liked the joke about Dominic Raab. Johnson refers to him as, "Dominic Raab... Two As and a B." Ouch! 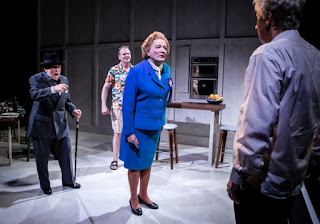 Churchill, Blair and Thatcher drop in on our indecisive hero, but these visitors appear as mere caricatures - albeit funny ones - rather than historic muses. And the allegory of the last supper and Christ doesn’t really come off.

I guess the the problem with creating a play about Boris Johnson is that it rather reinforces the man's inflated sense of his own importance. And I think that is one sense he does not lack.

Fun night out though.