The Second Violinist "We loved it. Unnerving, dramatic, and musical" @BarbicanTheatre 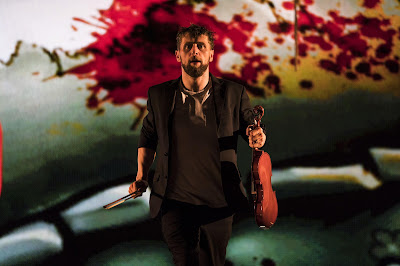 It was an exhilarating blend of opera, theatre and film and a narrowing study in heartbreak. With a bit of male nudity thrown in.

The eponomous second violinist is Matthew, whose life is falling apart: he won’t practise, and spends his evenings drinking and playing violent video games on his phone. In an initially comic prologue, he hides from a bombardment of voice messages from needy idiots and text messages from his local pizza company, while reluctantly travelling to rehearsals. Aaron Monaghan is compelling in this silent role, his whole body expressing pent-up frustration. His words are conveyed by text, mobile phopne snaps and phone video on a 13-metre screen behind him, until three singers invade his living room, enacting emotional scenes whose significance gradually emerges. One of these singers is Martin whose own life is falling apart. Could Martin and Matthew be one and the same person?

Walsh likes playing with multiple timelines in his work, and freely jumps backwards and forwards in time, laying one upon another. Soon the dual-personality becomes clear and Martin/Matthew's violent nature leads him to a even more unsettling climax in the woods.

For woods there are - the stage is split into three sections - the orchestra pit where our anti-hero performs, the middle section is his home, and floating above all this is a 40-tree wood. It's some set. On each wing of the satge were the seated chorus who occasionally invaded the action to no small comic effect.

We loved it. Unnerving, dramatic, and musical.

Posted by overyourhead at Friday, September 07, 2018