One for The Road / The New World Order / Mountain Language / The Pres and an Officer / Ashes to Ashes - "Simply spellbinding production." @JamieLloydCo #PinteratthePinter @HPinterTheatre #PinterOne 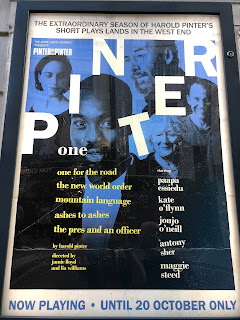 Billed as part of the Pinter at the Pinter season, this night was called "Pinter One" being the first collection (albeit, confusingly, the one we were seeing second.) Superbly directed by Jamie Lloyd and Lia Williams it was a top night of potent and dangerous political poetry, speeches, and plays by the great man.

The incendiary One for the Road was Pinter at his most terrifying: a ruthless government official interrogated a dissident and his family, but was the torturer more tortured than his victims? The New World Order explored how the abuse of power is legitimised in the name of freedom and democracy, as two brutal interrogators prepared to inflict their terrible punishment on a blind-folded insurgent.

Pinter investigated the suppression of ideas and the supposed threat of non-conformity in Mountain Language: a group of captives attempted to find a voice when their shared language was banned by the state.

In the second half, Ashes to Ashes, directed by award-winning actress and long-time Pinter collaborator, Lia Williams was a richly atmospheric and compelling play in which the dark nightmare of human atrocity infiltrated a couple’s living room.

Star turn of the night was Jon Culshaw who performed the world premiere of Pinter’s newly-discovered satirical sketch, The Pres and an Officer, an anarchic attack on the US Presidency.
Posted by overyourhead at Tuesday, September 25, 2018