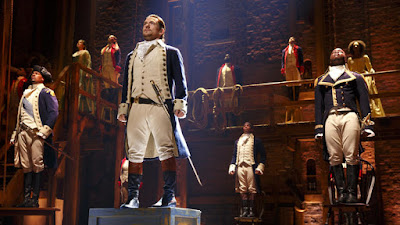 Hamilton's composer, lyricist, and star, Lin-Manuel Miranda thunders his massive show into town sweeping aside all before it. You can't argue with success, right? Money talks. Sold out performances can't lie. And the reviews - boy, those reviews - "one of the greatest artworks of the 21st century", "I am loath to tell people to mortgage their houses and lease their children to acquire tickets to a hit Broadway show," wrote Ben Brantley of the New York Times. "But Hamilton... might just about be worth it."

Michelle Obama even called it the "best piece of art in any form that I have ever seen in my life," (which perhaps raises some disquieting questions about the level of cultural exposure offered in the Princeton undergraduate curriculum.)

So what did we think?

Well, we didn't hate it! But we didn't really love it either. We just 'liked' it. It was good - and at times great - but the promising first half was a little let down by the rather boring second half. It was a super slick (too slick?) show though even if it was at times uneven.

We left thinking to ourselves exactly how did a ten-million-dollar 8th grader US history skit get described as "one of the greatest artworks of the 21st century"?

I'm guessing Miranda saw Les Miserables and thought - "let's do a hip-hop version of that." Revolution (check), stirring songs (check), a band of brothers and maybe they don't all make it (check). Only it's not really as good as Les Miserables. Or Rent even. The songs aren't as good for a start. And the subject matter doesn't really inspire this particular Brit - an annoying loud-mouthed orphan with a chip on his shoulder decided to help 'found' America but couldn't keep his dick in his pants. Ok, let's be nice - let's just say the musical is about putting a humanising focus on famous American Founding Father Alexander Hamilton’s vulnerabilities and ambitions.

It's better than Wicked. But then we hated Wicked. 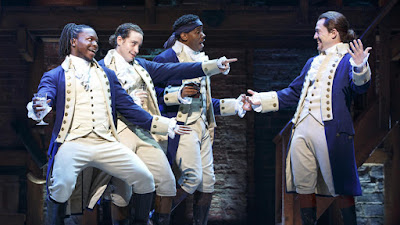 So given I've said we liked Hamilton, I do have a few issues with it...

To judge from the reviews in the UK press and online, most of the appeal of Hamilton seems to rest with the diversity of its cast and the novelty concept of a "hip-hop musical." Those who write about Hamilton often dwell primarily on its "ground-breaking" use of rap and its "bold" choice to cast an assemblage of black, Asian, and Latino actors as the Founding Fathers. Indeed, you'd think from all these column inches of praise that Hamilton exists more as a corporate HR department’s wet dream than as a biographical work.

But this casting "Founders Chic" tends to really downplay the involvement of the Founding Fathers in slavery. Slavery as a subject barely gets a look in. It’s still white history. And no amount of casting people of colour disguises the fact that they’re erasing people of colour from the actual narrative. Indeed, it does take some getting used to have a black actor play Jefferson, because the actual Thomas Jefferson raped slaves.

In its defence of the casting the director of Hamilton said, "It has liberated a lot of people who might feel ambivalent about the American experiment to feel patriotic."
I'm guessing "ambivalent," here, means being bothered by the country’s collective idol-worship of men who participated in the slave trade, one of the greatest crimes in human history. And to be "liberated" from this means never having to think about it.

Also why was the audience so resoundingly white? (Not, that that is solely a criticism aimed at Hamilton mind you!)

Given the wealth of alpha males on stage, it's too bad that the female leads are made to sound like afterthoughts, consigned to more traditional Broadway roles and bland blends of R&B and show-tune balladry. As Hamilton the man negotiates a tricky triangle of three lovers or would-be-lovers — his wife, his wife's sister and a mistress — Hamilton the Bechdel Test failing show loses momentum.

The leading women in Hamilton are long-suffering actors who melt into the background while the strutting male leads get all the best lines and songs.

One of the unfortunate aspects of the success of Hamilton is that it has made tickets formidably expensive. For those on the lower end of the income scale, the show exists as a tantalizing yet elusive dream. We paid £400 for two tickets. And there are stories of people paying four times that amount.

The use of hip-hop has been described as new. Yes, hip-hop - that edgy, up-and-coming genre with only 37 years of mainstream exposure.

We couldn't remember a single tune after the curtain fell. Apart from maybe "The Room Where It Happens" which was one of the few standard pop songs in the show.

When it was good it was very, very good. When it was bad, it was terrible.

Perhaps marginally less embarrassing than "when I say yo, you say ho." But only ever so marginally.

Thankfully for every cloying, bourgeois "ten-dollar Founding Father without a father" and "when the British taxed our tea we got frisky," we were treated to the thrilling "I'll be Socrates throwing verbal rocks at these mediocrities." and the genius phrase, "will no one mention the eloquence in the room".

The Hamilton-Jefferson battle raps was quite good fun too but the show's most entertaining musical moments belong to King George III. He's played with condescending flamboyance and his perpetually raised pinkie finger. The king's a punch line, the sound of the Old World being subsumed by the faster, quicker, brighter hip-hop future of America. Yet he commands the stage like no other cast member by channelling Queen's Freddie Mercury. The clueless King loves to knock his rivals and perceived inferiors (which includes pretty much everybody) down to size with foppish putdowns. He makes even his wordless vocal melodies sound like he's heckling.

As I say we liked it. I’m not sure it will become one of the all-time great musicals though. It's no West Side Story. At best I'd say it's a nice musical about immigrant pluck, impudence and ambition.

That said, it was great to see so many black actors on stage. But perhaps the power of the piece's grand political point about America as a country built on the backs and minds of immigrants is conveyed as much by the actual content of the show as by its mode of presentation.

But it’s better than Wicked.

Posted by overyourhead at Friday, February 23, 2018