Everybody's Talking About Jamie - its fun, funny and fabulous... @JamieMuscial 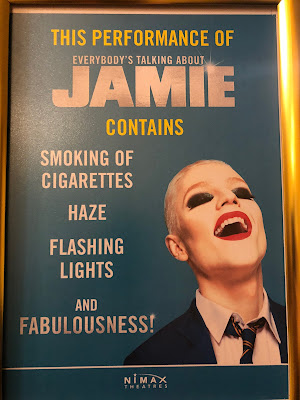 The inspiration for Everybody's Talking About Jamie is 22-year-old Jamie Campbell, whose youthful ambition to become a drag queen was the subject of a BBC TV documentary, Jamie: Drag Queen at 16 in 2011.

Apparently Mr Campbell is rather unlikeable in real life - something that certainly can't be said for his newly renamed on-stage version Jamie New.

Jamie New (as played by John McCrea) is lovely and what is more he can sing, he can dance, and he can act. A triple threat with dynamite legs to match.

The play is written by Tom MacRae and the music by Dan Gillespie Sells and its fun, funny and fabulous.

The story is thoroughly feel-good - bigots are exposed, minds are changed, and everyone camps it up - you get the idea. And the songs are spot on, from the opening dance number "And You Don't Even Know It" through to the rousing "Spotlight" sung by Jamie's bestie Pritti to the show-stopper "He's My Boy" sung by Jamie's mother Margaret.