Erasure - Great gig (as ever) only marred somewhat by the dangerous over-crowding at the venue @EventimApollo @erasureinfo... 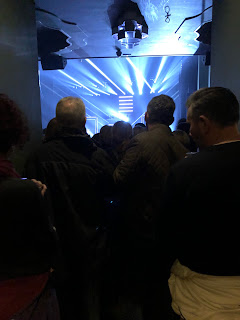 Last Friday night Stuart, Angie, Kev and I went to see the wonderful Erasure at the Eventim Apollo in London's glitzy Hammersmith.

Ostensibly to continue the promotion of their new album World Be Gone the marvellous duo of Andy Bell and Vince Clark put on a great show, as ever, for a very enthusiastic crowd. And there was tip-top setlist. We sang, we danced, we laughed, we sang some more.

It was just a bit of a shame that the Eventim Apollo was dangerously overcrowded downstairs though. An accident waiting to happen I suspect. I spoke to the manager who denied that there was any issue even as her staff where holding doors closed to keep people in. The words "Nero", "fiddling", "Rome" and "burning" spring to mind.

World Be Gone is Erasure's 17th album and is quite a change of direction. Gone is their sugary pop and uplifting songs of love and hate replaced by a voice of remonstration and discontent. The songs are a lot more sombre taking on topics that blur the lines between pop and politics. None demonstrates this more adult theme than the beautiful protest song "Still It’s Not Over" - a lament on HIV/AIDS. Although the new songs are mostly melodic, they are slower and painfully vulnerable and perhaps not suited to a largely standing venue when people really just wanted to dance, dance, dance baby. Heart-felt though the performances were of these more thoughtful songs when they came on people were all too often seen running to the bar or the loo.

But then when a high-tempo hit came on to follow it the place erupted again in a sea of cheers, dancing and singing. And the hits kept on coming. It was perhaps the biggest karaoke venue in town that night. 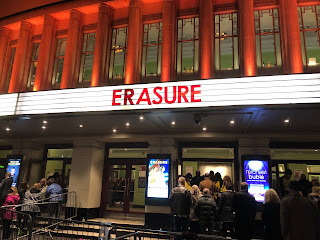 Even as the last notes of A Little Respect died away the crowd kept singing it all the way out of the venue, along the street and down onto the tube station.

Tales of the Unexpected
Oh L'Amour
Ship of Fools
Breathe
Mad As We Are
Just a Little Love
In My Arms
Chains of Love
Sacred
Sweet Summer Loving
I Love Saturday
Victim of Love
Phantom Bride
World Be Gone
Who Needs Love Like That
Take Me Out of Myself
Blue Savannah
Atomic
Drama!
Stop! 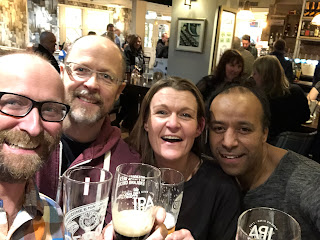 Posted by overyourhead at Monday, February 26, 2018