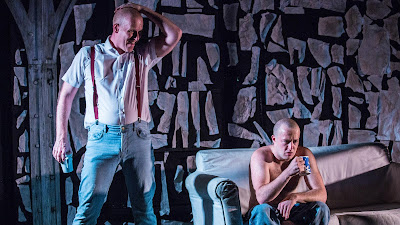 Last Saturday night Stuart and I went to see the marvellous Outlaws to In-Laws at the King's Head Theatre in London's glitzy Islington.

Consisting of seven gay plays by seven gay playwrights the evening moved us through each of the last seven decades from the 1950s onwards telling stories of gay British history at pivotal moments of gay history. The evening was certainly not short on ambition.

Each play explored - albeit briefly - gay lives against a rapidly changing social history from intolerance, violence and hate to the legalisation of homosexuality and gay marriage. There are also some zinging one-liners - as a drag queen sniffs a line of coke off a framed picture of Princess Diana - "nice to see Charlie and Di back together at last!"

Happy and Glorious by Philip Meeks is set in 1953. On the day of Queen Elizabeth’s Coronation, South London lad Dennis follows a young man away from the celebrating crowds to an apartment overlooking Westminster Abbey. He soon discovers a world far away from his own and within a matter of hours he falls in and out of love. As the new monarch is crowned, Dennis’ life will never be the same again. It's a funny play heralding he changes in the law that are all too necessary.

Mister Tuesday by Jonathan Harvey is set in the 1965. In their own little love nest, Peter loves Jimmy and Jimmy loves Peter - but only every Tuesday. Peter wants more from Jimmy but Jimmy has a sensitive job, a wife, and baby on the way. Frustrated, Peter makes Jimmy a bleak offer to make sure he won’t flee the nest. Blackmail, sex, and cucumber sandwiches - it was a funny but sad reflection of a life unlived/unloved.

Reward by Jonathan Kemp is set in the 1977. It’s the Queen’s Silver Jubilee. Donald, a sweet 16 American meets Spike (Jack Bence), a white skinhead, at a bus stop in a dodgy part of town. The attraction is instant. Except Spike belongs to the National Front and bookish Donald (Michael Duke) is black. Will their love take them to a place of reward or punishment? This play had more time to breathe than the others so perhaps fared best. Boosted by strong performances, it’s a nicely observed, affecting character study in an economically bleak landscape shadowed by racism.

1984 by Patrick Wilde is set in the 1984 (Duh!). The Conservative Party Conference is about to start when Tommy and Allan find themselves under Brighton Pier, but the time for hiding in the shadows should be over. Allan, Margaret Thatcher’s aide, is preparing to help legislate against gay people. Suddenly the political and the personal become a matter of life and death.

Princess Die by Matt Harris is set in the 1997. Shane has had yet another disastrous night out with his boyfriend, and worse his fledgling drag career is struggling to get off the ground. All seems lost until he finds a gorgeous, naked stranger in the flat. Can Tyler help Shane find the personal reserves to carry on before things get any worse? This play was inventively surreal as it dives into drag queen Shane’s comedown after learning his boyfriend is HIV+ on the night his idol, Princess Diana, dies. Alex Marlow’s bewilderment as Elliot Balchin’s Calvin Klein mannequin comes to life on his sofa is well pitched for this astringent farce.

Brothas by Topher Campbell is set in 2003. It centres on Dwayne, a muscular, attractive Jamaican immigrant and his overweight, plain university friend, Remi. They are chilling, and chatting… and chatting to guys online but after Dwayne finds a hot date for the night - with benefits he discovers Remi is using a fake profile...

The Last Gay Play by Joshua Val Martin is set in the present day. Anyone can get cold feet before getting married but hiding in the chapel belfry isn’t the answer. Will the Father get the groom to the altar or does he care more about the church roof than he does about the couple’s happiness?

Mary Franklin’s staging shifts nicely between all the plays, although it’s hampered at times by issues with audibility. But even through this production’s clumsier moments, the joyful message in this last play as Robin and Zak pop open the poppers and decide to live married life their way is loud and clear.

A great night out.

Posted by overyourhead at Tuesday, September 19, 2017