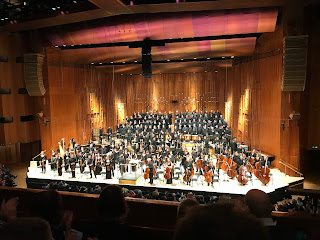 Paul Woodward, Stuart and I spent a glorious weekend at the Barbican where a series of events were staged to celebrate Philip Glass's 80th birthday.  It was a Total Immersion weekend of concerts, premieres, talks and films. We were totally blown away.

Highlights for me were a selection of his Piano Etudes and his Glassworks both performed at the Milton Court Concert Hall, his Knee Play 3 from Einstein on the Beach with the BBC Singers and Concerto for Two Pianos performed by the barking mad Katia and Marielle Labèque sisters. Glorious.

After Saturday's night amazing rendition of Itaipu - Glass's four-movement symphonic cantata written in 1989 - we were shaking with glee and delight as tears streamed down our cheeks.

Yeah. You could say we liked it.

Later that night Paul wrote this (and I couldn't have put it better myself)...

I have to share this with you...
Don't know if you are into, or even like, the music of Philip Glass
But just been to a 'total immersion' day of his music to celebrate his 80th birthday - thanks to a beautiful old mate Jonathan and his partner Stuart... (bless you for thinking of me last minute!)
FUCK ME!
It's been EXTRAORDINARY
from 12:30 to 22:20
And the last piece just ripped me to shreds with its power.
Some things are just TOO BIG
I guess that's the theory of the 'sublime' isn't it? A state of AWE in the face of something so monumental and totemic that it confounds us, shakes us to the core, and reminds us of our place in the grand scheme of things...
The mountains of north Scotland
The death of my father
The theatre of Robert Wilson
The music of Philip Glass
The enormity of the craft of teaching
The broken heart
The birth of a child in all its muck and glory
Falling in love and having sex with that person
Snowstorm (anywhere)
And, inevitably, death
Something's are just TOO BIG AND FUCKING BEAUTIFUL
and it struck me watching a massive orchestra - how the enterprise and artistry is THE solution to all the SHIT THINGS happening in the world right now
If you say the violins aren't welcome.. how the whole would suffer...
If you said the percussion section were criminals and drug dealers and they should not have a place.. how barren it would be
If you said the harpists were perverts and deviants... then the heavenly and delicate sounds would deprive the WHOLE ORGASMIC SOUND of so much magic
An orchestra playing music that is SO BIG it's like a physical workout
There is my perfect metaphor for a society I want and need and would lay my life down for ..
Thank you Philip Glass... and happy 80th birthday 😀