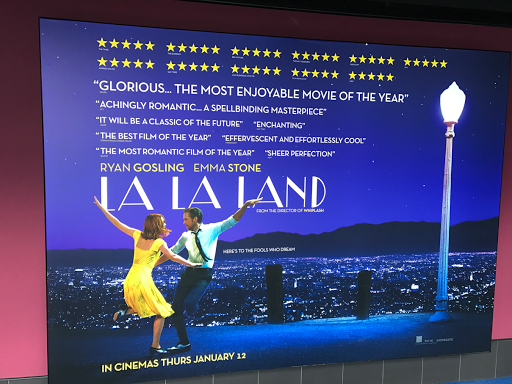 Stop whatever you are doing right now and go and see La La Land. Right now! It's brilliant. I wept full-on man tears five times. Tears of utter joy. It is fantastic.
You will be dancing out of the cinema and singing the astonishing songs. I have just downloaded the soundtrack and listening to it on repeat. I particularly love Another Day in the Sun and Someone in the Crowd. It has gotta be made into a West End musical!

La La Land is a love letter to LA and people wanting to make it big - but rather than roasting you in a wannabe's naked ambition it lets you swim in cool blue waters of people with potential and passion.

The film aside, I had planned to go and see it at The Screen on the Green but it was closed. Shutters down. So missed their early showing. Shame on them. So went to see it at the Vue instead.

After seeing the film I popped into SotG just to say that I had been standing outside in the cold and the guy apologised profusely, offered me a full refund and two free tickets valid for a year at any Everyman cinema. Nice guy.

Posted by overyourhead at Friday, January 13, 2017