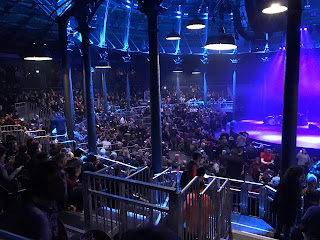 Last night Simon and I ventured out into the cold night air to sit and listen to the gentle, melodic fingerings of Lambchop as they performed in the round at The Roundhouse in London's glitzy Camden.

The current season at The Roundhouse is an all-seated affair, which is actually much better than their usual standing-behind-the-tall-bloke-with-the-chatty-mate we usually are treated to.

I didn’t really know much about Lambchop before going to see them and to be honest I'm not sure if I'm any the wiser afterwards. They didn't talk much.

They seem to come from Nashville, Tennessee. They don't like Trump ("What's 15 inches long and hangs in front of an arsehole" "Donald Trump's tie"). And their music is decidedly - how can I put this? - understated. Which makes for a very relaxing evening. Perhaps too relaxing for some people judging by the man two down from me who was snoring for the last half hour of the hour and three-quarter hour set.

I liked it though. Apparently, they were doing stuff from their more recent albums. Pleasant enough. Perhaps a little too reliant on the Vocoder though c.f. George Michael's cover of True Faith so it was hard to hear the lyrics. Especially as they didn't play particularly loudly either. At one point a bloke near us shouted out, "Turn it up!"
Posted by overyourhead at Friday, January 27, 2017