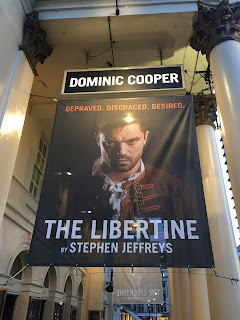 Last Friday Stuart and I went to see Stephen Jeffreys's The Libertine at the Theatre Royal Haymarket in London's glitzy West End.

It's a good play but compared to other recent revivals of Restoration Comedies it's a fairly humdrum production. The man behind us fell asleep and starting snoring.

Dominic Cooper plays John Wilmot, the debauched 17th Century rake the Earl of Rochester who is a charismatic poet, a playwright and a rake. He has a legendary appetite for excess, yet this most ardent of hedonists is forced to reconsider everything he thinks and feels when a chance encounter with an actress at the Playhouse sends him reeling.

The scripts is crude and rude but with much flair and wit. It's a wild romp through 1670s London and offers an incisive critique of life in an age of excess.

Cooper makes a good rake and knows how to smoulder but the production never really catches fire.
Posted by overyourhead at Tuesday, September 27, 2016