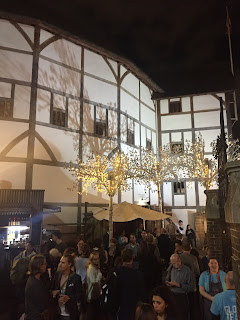 Last Thursday night Stuart and I went to see Imogen - a gritty reimagining of Cymberline - at Shakespeare's Globe on London's glitzy South Bank.

It's fun, funny, and chaotic but rarely puts a foot wrong. It treads that fine line between trying too hard and trying hard enough very well.

Starring ex-Eastender Maddy Hill as Imogen the story is one of mistaken identity, infidelity, decapitation, and kidnap. And that's just for starters. Before the show we were warned of...

STRONG LANGUAGE including: Loud music and explicit lyrics
DRUGS including: Marijuana smoking and cocaine snorting
VIOLENCE including: Gun fights, blood and torture
NUDITY including: Sexiness and a bit of nudity
SPECIAL EFFECTS including: Strobe lighting, theatrical smoke and the possibility of being splattered

...and it didn't disappoint.

So if you've got £5 and three hours to spare and don't mind standing as a groundling it's highly recommended. You won't be disappointed and you'll be bouncing along with the production by the end. Literally.
Posted by overyourhead at Monday, September 26, 2016