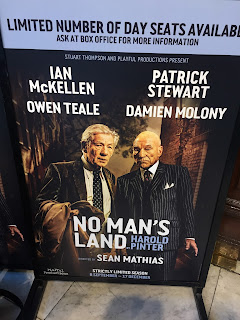 "The best time to drink Champagne is before lunch, you cunt."

Starring Jean-Luc Picard as Professor Xavier and Gandalf as Magneto it's a play where... Not. Much. Happens. A couple of old poets meet in a pub and carry on drinking back at one of their houses near Hampstead Heath. Later a couple of other suspicious men join them and we are never quite sure who anyone is, what any of them are doing or whether any of them are lying. But that is it's charm and it's power. The gulf that is always there - the no man's land - between truth and fiction. In vino veritas, in vino falsitas.

Apart from the rather infamous line (see above) there are many quotable sections stuffed with such profanity that make it definitely not suitable for children. But it made Stu and I laugh out loud.

A more family friendly joke was:-
"I shared a drink with the Russian Émigré once"
"What, the same drink?"

Some of our fellow audience members got a bit bored and left at the interval which was shame as good though the first half was, the second have was hilarious.

There's life in the old dogs yet. But maybe your last chance to see Ian McKellen and Patrick Stewart together on stage.
Posted by overyourhead at Friday, September 16, 2016