The End of Longing... 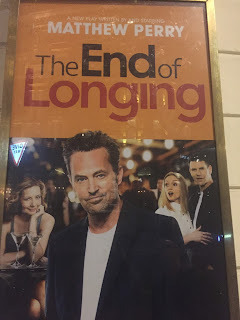 Last Friday night Stuart and I went to see The End of Longing at the Playhouse Theatre in London's glitzy West End.

Written by and starring your own, your very own Friends' star Matthew Perry the play told the story of an alcoholic, Jack, who meets up with and falls for a high-class prostitute, Stephanie. At the same time Jack's dumb best friend (called Joseph - see what he did there?) falls for Stephanie's needy best friend Stevie. Their two relationships have their ups and downs and the will-they won't-they end up together narrative frankly got a bit tedious after a while. Sure, there were some funny one-liners thrown in and the supporting cast made the best of what they had been given but Matthew Perry's central performance was simply piss-poor. It felt like he was reading his lines from a script. Now maybe this was the inevitable consequence of him also being the writer as well as the lead player but whatever the reason it was lamentable to watch. Even his heart-felt confessional speech for his AA Meeting at the end couldn't save it. Could it beeeee any worse, Chandler Bing?