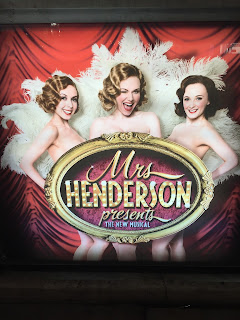 Based on the 2005 Judi Dench film, this new musical with lyrics by Don Black and tunes by George Fenton and Simon Chamberlain, stars the wonderful Emma Williams.

The story tells of Mrs Laura Henderson, the real life impresario and owner of the Windmill Theatre in Soho who, during the Blitz on World War II, hit upon a novel way of boosting morale and getting bums on seats.

Surprise, surprise it involved getting chorus girls to take their clothes off. And to get it past the censor she sidestepped the Lord Chamberlain's objections by making them pose as naked tableaux.

So is this a story of female entrepreneurship and women's empowerment? Of plucky Brits sticking it to Hitler by keeping the lights on as the bombs fell (there motto was "We Never Close")? Or a cynical case of sexist titillation perpetuated by first the fact, then the film and now this musical? And just as importantly, is it actually any good as a show?

Me? Well, I loved it too. I thought it was funny, jaunty and frequently idiotically and endearingly patriotic. The songs were fun and at times poignant. Emma Williams as one of the stripping gals brings to life a song like "If Mountains Were Easy to Climb" and Ian Bartholomew as the show's Jewish manager has a call to arms in "Living in a Dream World" which is genuinely moving.

Was it sexist? Yes, a bit. Was it jingoistic? Yes a bit. But what it lacked in political correctness it more than made up for in darned right fun. Rather like The Lyric's Tipping the Velvet last year and the seminal Oh What A Lovely War! it used the theatrical device of a stage comedian between scenes to draw the audience in and examine our own views of what the theatre is for, our views on censorship, and what is done in the name of good old British pluck.

And any show what has mass tap-dancing, male nudity (yes, the boys get their kit off too) and a whole chorus line playing the spoons (no, really) - gets my vote.

Recommended. Especially after a sweet sherry ‘sharpener’.
Posted by overyourhead at Friday, February 19, 2016