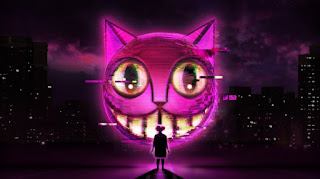 Last night Stuart and I went to see wonder.land at the Olivier Theatre on London glitzy South Bank.

Based on Lewis Carroll's Alice's Adventures In Wonderland and created by Daman Alban, Moira Buffini and produced by Rufus Norris we had high hopes. And oh how they were dashed.

It was all just a bit disappointing.

The idea behind the story was good - substituting Carroll's Wonderland for an online video game called wonder.land. In the 'real' world we get introduced to teenager Ally whose life at home and school is a drag so she starts playing wonder.land, creates her own avatar - Alice - and joins the game. Interestingly her avatar is white-skinned whereas she is not - but this potentially provocative path of online identity is barely trod.

The visuals are stunning and the video back projection is state of the art as we tumble down the rabbit hole along with Ally/Alice. Soon we get to meet the other avatars in the game the Cheshire Cat, (Tweedle) Dum and (Tweedle) Dee, Mock Turtle, Dodo etc. who all have their own reasons to be online and the 'real' world action in Ally's life gets mirrored by the online action in Alice's.

So what's wrong with it? Well, the songs for a start. This is a musical after all and the songs just aren't good enough. Not a memorable tune amongst them. And this really is where it all falls down. If you want people (and kids especially) to sit in front of a performance for two and half hours there needs to be more than just the wow factor of colourful costumes and some nice looking back projection.

And with such hammy songs it all took on the air of an amateur dramatic pantomime - albeit a very lavishly produced one. I'm sure I actually heard booing when the Red Queen appeared. And who knows whether that was part of the show or not? And with all the players dressed up as if they had stumbled out of a Nutcracker dress-rehearsal it made you long for music as good as in that particular Christmas treat.

So to sum up - the production values were sky-high, it is not without it's good points, but the musical aspects (words and music) we poor.

Brave effort - could do with musical rewrites.

Posted by overyourhead at Thursday, December 10, 2015