Evening at The Talk House... 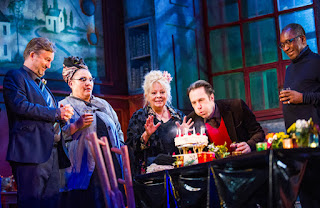 Last Friday night Stuart and I went to see Evening at The Talk House at the Dorfman's Theatre on London's glitzy South Bank.

This new play was written by and starred Wallace "Woody!" Shawn (yes he who voiced Rex in the Toy Story films and played the Ferengi Grand Nagus Zek in Star Trek: Deep Space Nine.)

Much as I like Mr Shawn as an actor, sadly this play was a load of old shit.

The plot revolved around a group of people who had been involved in a play ten years earlier having a reunion in a private club The Talk House. We meet the hostess, her waitress, the playwright, the composer, the actress, the former television star brutally beaten up. Some of the group make TV shows now but don't get on that well. In parallel to this the characters refer to being involved in state sponsored murders they commit remotely on people around the world who are suspected to being up to do good. But none of these themes are developed enough.

Even the presence of players such as Simon Shepherd, Joseph Milligan and Jospeh Mydell could not do much to save it.

The actors bravely struggled on with what they were given but it was over-long, and read like a sixth-former's attempt at writing a sequel to Orwell's 1984 and getting a D- for their efforts.

We left the theatre saying "What the hell was that?" and judging by all the empty seats around us word had got round what the answer was.

Posted by overyourhead at Monday, December 14, 2015