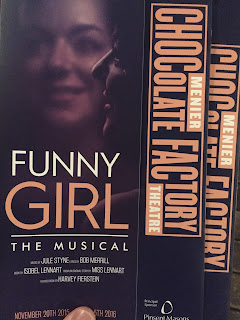 The plot is based on the life and career of Broadway star, film actress and comedienne Fanny Brice featuring her stormy relationship with entrepreneur and gambler Nick Arnstein. The musical was written in 1964 and made into a famous film starring Barbara Streisand.

This production stars Sheridan Smith as Fanny and Darius Campbell as Nick, with direction by Michael Mayer, and a revised book by Harvey Fierstein. The entire run sold out within a day, making it the Menier's fastest selling show on record.

Smith is excellent. She can sing, she's funny - everything you'd want from a Fanny. Campbell can sing Ok but hasn't quite got it in the acting department. Great supporting cast though and it's a fun and funny show.

Posted by overyourhead at Monday, December 21, 2015