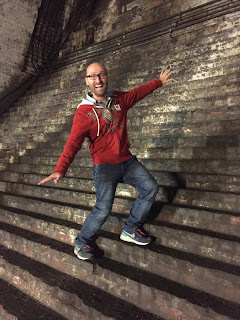 Last weekend Stuart and went on the Tower Bridge Engineering Tour. Despite being one London's most popular visitor attractions and an iconic landmark recognisable around the world I'd never been inside Tower Bridge before.

So why go last weekend? Well, they were holding this engineering tour so we got to see not only the regular Tower Bridge Exhibition and Engine Rooms but also a trip down the spiral staircase below the water line into the bowels of the Tower where the bridge mechanism operates.

And what a fantastic tour it was. Fascinating facts about how many how much the bridge cost back in 1886 (just over £1m), how people died in its construction (10, 4 of them divers), why it doesn't run exactly straight across the river (disagreement over land ownership on the north bank), how the road bridge actually opens (hydraulics using water up until 1974 and since then oil) and the fact that if you took away all the bricks and mortar the metal frame that would be left would still operate the bridge perfectly well.