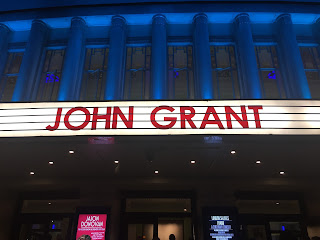 Last night Stuart, Mark, Denz, Simon and a couple of thousand other men with checked shirts and beards went to see John Grant at the Eventim Apollo in London's less than glitzy Hammersmith.

Beardy Mr Grant specialises in a line gravel-voiced miserablism that hits a chord with today's ennui generation and which taps into the celebrity-ladened media's obsession with 'self' perfectly. Only John Grant doesn't need to make up his angst like so many pop stars do each day for the entertainment pages. He is the real deal. He has genuine angst - in buckets.

His exploration of his own psyche - the defensiveness, the occasional self-hatred but utter self-awareness - shows an amazing depth of feeling and passion that simply spews out into his lyrics. And he certainly has the history to draw on - alcohol and drug addiction, coming to terms with being gay and HIV-positive, problems in his youth and trouble with a former boyfriend are topics all keenly and wittily observed. It was at times painful to hear such naked emotion expressed vocally but his songs tell a truth that clearly taps into the collective consciousness of the surprisingly diverse audience at the venue last night. More often than not he had us in the palm of his hand.

Musically John Grant is truly gifted too. There is no other expression for it. Perfectly crafted songs that simmer and then soar into the air like the Icelandic volcanoes he once lived so near. His sound sits somewhere between Sigur Ros and a late 70s prog rock band – beautiful atmospheric songs with the occasional six minute synth-fuelled epic which demonstrate his obvious fandom of bands like the Cocteau Twins.

The place was packed with adoring fans. And there was much to adore. The man is a master of his craft.
Posted by overyourhead at Friday, November 13, 2015