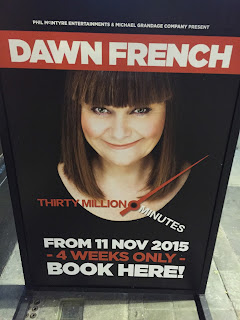 It's a show where Dawn talked about some of the most intimate parts of her life with unprecedented openness and much humour.

She can do this she says because she is currently in that "sliver of time between the madness of my menopause – now thankfully over – and the impending madness of my dementia".

Only very briefly did she refer to Fatty Saunders and The Vicar of Dibley. She did spend a little bit more time talking about Lenny Henry though and the extreme racism they both encountered.

Dawn French is a national institution and her big-hearted show well deserved the standing ovation at the end. If you get a chance to go. Do!
Posted by overyourhead at Thursday, November 12, 2015