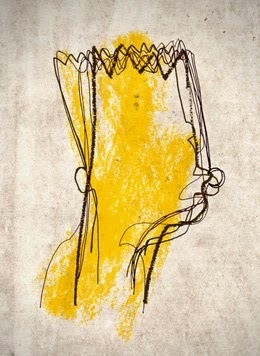 Last night Stuart and I went to see Mr Burns - a new post-electric play by Anne Washburn - at the Almeida Theatre in London's glitzy Islington.

We had high hopes having recently seen American Psycho, 1984 and Charles III there. Oh dear, oh dear, oh dear. What a load of crap.

Act I
Set in a post-apocalyptic world a group of survivors sit around a camp fire trying to remember the details of The Simpsons episode Cape Feare. A rather good episode that we were personally very familiar with having recently watched it and being big Simpsons fans ourselves. Occasionally they are joined by another survivor who they welcome by reading aloud names of ten missing people who they are looking for. They then return to trying to remember The Simpsons episode. Forty minutes later they are still doing the same thing. And? We get it!

A few people left at the first interval shaking their heads.

Act II
Seven years later the same survivors are performing various Simpsons episodes for money as a travelling troup. They buy lines from episodes to use in their show. They also perform the adverts between the shows. Good idea. Woefully underwritten though. It should have been funny, clever and insightful. It was none of these. It was frustrating, over-long and repetitive. Audience members near us were sighing, tutting and yawning. Which is a mean trick if you can do all three at once.

Most people on our row left at the second interval. We were tempted.

Act III
Seventy-five years later The Simpsons has become a cult / an opera / a performance. It has taken over the lives of the performers. And it is crushingly embarrassing. The squandering of the obvious talents of the actors, technicians, wardrobe, make-up and other professional people involved at the theatre was shameful. I was embarrassed for everyone involved. How this show ever got made is astonishing. I have seen some awful productions on the stage - very few of which I've wanted to walk out of - but this was the worst. By far. We couldn't even bring ourselves to laugh at it - as many people around us were. We were just sad.

Putting on such awful rubbish hurts the Almeida Theatre brand (we'll think twice about booking there again), The Simpsons brand (how did they every agree to it?) and the night's out at the theatre in general. Stay in and watch TV folks - when it's good TV is better written and presents ideas in a more cohesive way than this tosh.