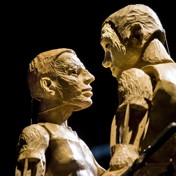 Last night Stu and I went to see Or You Could Kiss Me, a new play by Neil Bartlett and Handspring Puppet Company, at the National Theatre.
From the people who bought us War Horse and using a bare stage, a handful of domestic props and the astonishing puppetry that is Handspring’s trademark, Or You Could Kiss Me was an intimate history of two very private lives, lived in extraordinary times. The story was one of a gay relationship told through puppetry and narration. The two near life-size wooden puppets were operated by seven black-suited figures, including Adrian Kohler and Basil Jones, the show's co-creators.
In the winter of 2036, in a shabby apartment in Port Elizabeth, two old men search for a way to say goodbye after a lifetime spent together. In the perfect summer of 1971, in a very different South Africa, their handsome younger selves search for the courage to fall in love. And poised halfway between these two stories – one imagined, one remembered – their real-life counterparts bear witness to both the beginning and the ending of an incredible journey.
I'd like to say it was a moving tale. But... to be frank it was boring. A real let-down. The only stand-out aspect was Adjoa Andoh who was excellent as the narrator. I guess it was nice to see gay life at all ages so expressively played out on a national stage but to be honest we were really disappointed.

Posted by overyourhead at Wednesday, November 17, 2010