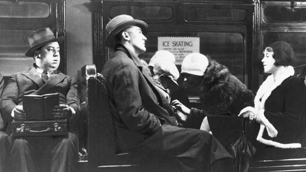 Last Sunday night Stu and I went to the Barbican Hall to see a screening of Alfred Hitchcock's black and white silent film Blackmail (1929). The film was actually made in two versions at the same time - one with sound and one without. Not all cinemas had sound equipment - hence the two versions. The two versions even had a slightly different cast.
Our heroine Alice has stabbed to death a man who tried to rape her. Her boyfriend Frank, a policeman, covers it up; but Tracey, the local petty thief, tries to blackmail the couple. This leads to Tracey’s attempted arrest and a spectacular police chase which ends on the roof of the British Museum.
The new music, performed live by the BBC Symphony Orchestra, was scored by Neil Brand and was a UK premiere.
Great film. Great score. Great performance.

Posted by overyourhead at Wednesday, November 03, 2010