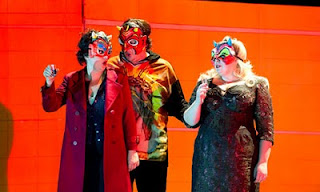 Last night Stu and I went to see Don Giovanni as performed by the English National Opera at the London Coliseum.
It was a new production of Mozart's work directed by Rufus Norris (Afore Night Came, Cabaret, Les Liaisons Dangereuses, Festen) with the set designed by Ian MacNeil (Festen, Ariodante, Billy Elliot: The Musical).
Don Giovanni (part Don Juan, part Casanova), a young, arrogant, sexually prolific nobleman, abuses and outrages everyone else in the cast, until he finally encounters something he cannot kill, beat up, dodge, or outwit - a guest who he has greatly wronged. This new interpretation of a classic tale takes our anti-hero from some nasty sexual violence through three hours of thoroughly rotten bad behaviour to a very sticky end. The cast were good. The music good too. The set was something else though. The elements raced and twirled and span like dodgem cars - the cast seemed to have to leap out of it's way. Still, we both enjoyed it and it never flagged. The English translation was a hoot too - very contemporary. Recommended.

Posted by overyourhead at Thursday, November 18, 2010