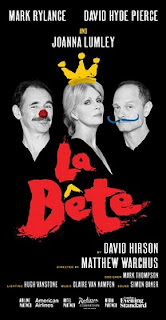 Last night Stu and I went to see La Bête at the Comedy Theatre in London's glitzy West End.

Starring Joanna Lumley (The Princess), David Hyde-Pierce (Elomire) and Mark Rylance (Valere) the play is a pastiche of a 17th century French play in the style of Moliere. Oh, and it is written entirely in rhyming couplets.

The action centres around a spitting, farting, burping, shitting street entertainer Valere who The Princess, a patron of the arts in the Languedoc of 1654, takes a fancy to. Current high-brow favourite actor-playwright Elomire is then commanded by the Princess, to his great annoyance and ire, to make Valere a member of his acting company. Low brow tackles high brow to the ground.

Rylance was excellent - in full flood and very funny - especially in the twenty-five minute opening egotistical monologue. Hyde-Pierce was given rather less to work with but was admirable in his first disdain and then anger at the pretentious cuckoo. Lumley was given the least to work with sadly. She did manage bring out the shrewdness in The Princesses shrewishness though. We laughed and laughed.

So Purdey, Niles and Rooster done good.
Posted by overyourhead at Friday, July 09, 2010