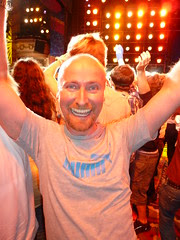 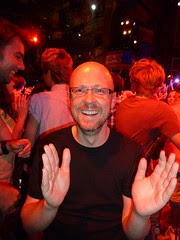 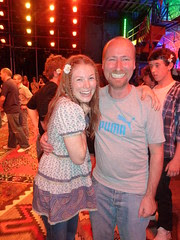 Stop me if you've heard this one before.... The first proper date Stu and I went on was to see a revival of the 1967 hippy musical Hair at the Gate Theatre in 2005. Twelve years earlier than that coincidentally we'd both seen the same 1993 production at The Old Vic starring Sinitta and John Barrowman.

We are both big fans. Obviously.

So naturally we went to see the Broadway revival at the Gielgud Theatre with the original New York cast a month or two ago.

And we just couldn't keep away so few weeks ago we went again.

And guess what? We still couldn't keep away. So we went yet again last night. Still at the Gieldgud Theatre and still with the original New York cast.

Well, you would wouldn't you?

This production really does the material justice. It is active, energetic and enthusiastic. Simply staged it allows the great singing to come to the fore. Last night the audience were involved from start to finish being encouraged to join in as the action on the stage bled into the auitorium. Climbing over the seating the cast sang, danced, handed out posters and passed round flowers. By the finale the audience were so involved they flooded onto the stage to join in the fun. Naturally we just had to join them (again).

We probably liked it even more the third time of viewing. I wonder if we can sneak in a fourth and final time before it closes on 4th Sept?

Posted by overyourhead at Wednesday, July 21, 2010