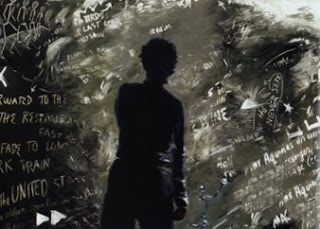 Laurie Anderson is in London this week for a four-night residency at the Barbican Theatre, where she is performing her latest piece, Delusion.

The show is an intimate, constantly evolving live show using multimedia to tell stories. The idea for the show started out as twenty linked stories but then developed into a play for two people which then iself turned into a picture show and then on to being a performance.

It's a performance. Art. Performance art.

Delusion is a hybrid.

The lights come up on two white screens, one like an open book, the other resembling an upturned bed; on both, flashlit video images of rumpled sheets are being shown.

On a purely sensual level, Delusion ranks with Anderson’s best.

It's a dream-like world.

John Kerry was asked "Do you love your wife?" He paused and then said, "I married 'up'". Ouch. Then he said "My mother said... On her death bed.... 'Integrity, integrity, integrity'". Needless to say, he lost the election.

Sensational visuals racing across the screens.

The idiot and the odyssey.

A dream sequence in which Anderson gives birth to her beloved dog, Lolabelle, are weird and hilarious and indeed weirdly hilarious.

Women's second names... They don't have their own; given one by their father, given one by their husbands. Their mothers' name is lost. Yet secret. A secret name. What's is your mother's maiden name? The key to unlock your identity.

Did you ever love me?

Leaves spiraling round a grave.

Delusion is smart, funny, emotionally engaging, and flat-out beautiful. In short, everything you’d expect from an artist of Anderson’s stature and reputation.
Posted by overyourhead at Friday, April 16, 2010