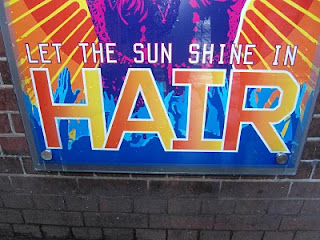 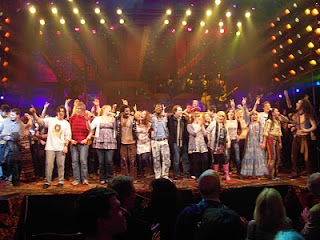 The first proper date Stu and I went on was to see a revival of the 1967 hippy musical Hair at the Gate Theatre in 2005. Twelve years earlier than that coincidentally we'd both seen the same 1993 production at The Old Vic starring Sinitta and John Barrowman. We are obviously both big fans.

So it was with a light heart we went to the opening night of the new production at The Gieldgud last night. Made all the lighter knowing that the entire New York cast had relocated to London for the show.

This new production did the the material justice. It was active, energetic and enthusiastic. Simply staged it allowed the great singing to come to the fore. The audience were involved from start to finish being encouraged to join in as the action on the stage bled into the auitorium. Climbing over the seating the cast sang, danced, handed out posters and passed round flowers. By the finale the audience were so involved they flooded onto the stage to join in the fun.