Middle @ Dorfman Theatre "Regret hangs heavy on the stage - but never once in the auditorium. We were very happy we came. Another triumph." -> -> review ->->

A week of so back Stuart and I went to see Middle at the Dorfman Theatre on London's glitzy South Bank.

Full disclosure. The author of this play is my mate David Eldridge. Dave knows me well enough that I will say what I think though. So, I couldn't be more proud, and honest, to say, I loved it.

Dave's first play in his trilogy of two-hander relationship plays was called Beginning and we went to see that three times we loved it so much. It was a marvel.

Here we find ourselves with a different couple though; Maggie (the fabulous Claire Rushbrook) and her husband Gary (the wonderful Daniel Ryan) are middle-aged, middle class, and middling along. It's the middle of the night in an average midsized home. Only Maggie isn't half upset. She's warming milk in the kitchen, alone, when Gary discovers her.

What follows is a real-time 100 min emotional rollercoaster. The performances are great - delivered with pathos and sincerity. Polly Findlay's direction is spot on. There are plenty of laughs, and much sadness too.

Ryan is a child of Thatcher. Self-made, slightly past it, working in the City. He tries to be sensitive; his idea of cheering his wife up is buying her two vibrators. Maggie has unfulfilled dreams though. She isn’t, and devastatingly has never been, happy. Gary tries to win her round; eventually conceding though, "Everyone’s disappointed." Their child has come between them. But the gulf between them has been widening for some time. They are on different sides of their relationship - and will they get lost in the middle?

Dave's writing is as assured as ever. He writes what he knows. And we, his friends, can see our mates and ourselves reflected in his work - as I suspect many couples do. There was noticeable seat shifting going on by couples around us!

Regret hangs heavy on the stage - but never once in the auditorium. We were very happy we came. Another triumph. Can't wait for the third play, Dave. 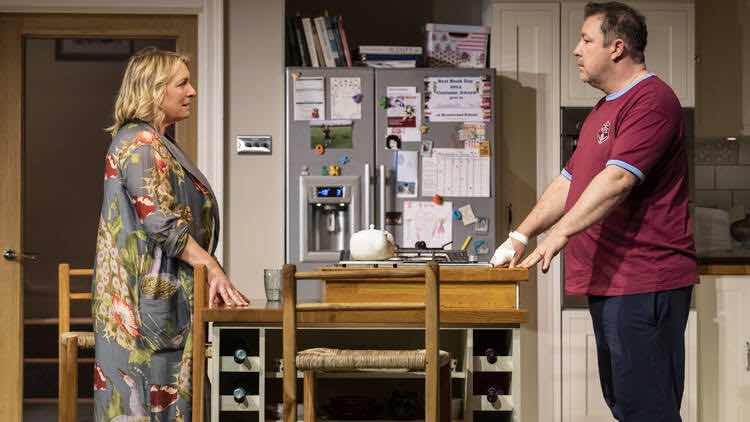