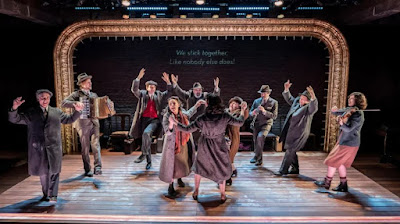 Deftly directed by Rebecca Taichman, Indecent is a heady mix of theatre, music (a small live klezmer band), and singing and an eloquent yet poignant love letter to Yiddish Theatre in general. It explores censorship, sexuality, and a divided community surrounding Sholem Asch's (in)famous play 'God of Vengeance'.

The crux of the early part of Indecent is censorship and how Jews might criticise themselves without ‘fuelling the fire of anti-Semitism’. Of course, the holocaust looms large over the play, but how could it not when making a play about Jewish lesbians in Poland in the nineteen twenties and thirties.

Indecent follows the story of the debut performance of ‘God of Vengeance’ and the theatre troupe’s travels across Europe and then to America. Controversy is never far away, which when produced on Broadway in 1923 caused the cast of the original production to be arrested on the grounds of obscenity. Is it a seminal work of Jewish culture or an act of traitorous libel?

Whatever your view of ‘God of Vengeance’, Indecent is a beautiful play, about a play, and it certainly resonates for now.

Posted by overyourhead at Wednesday, September 22, 2021