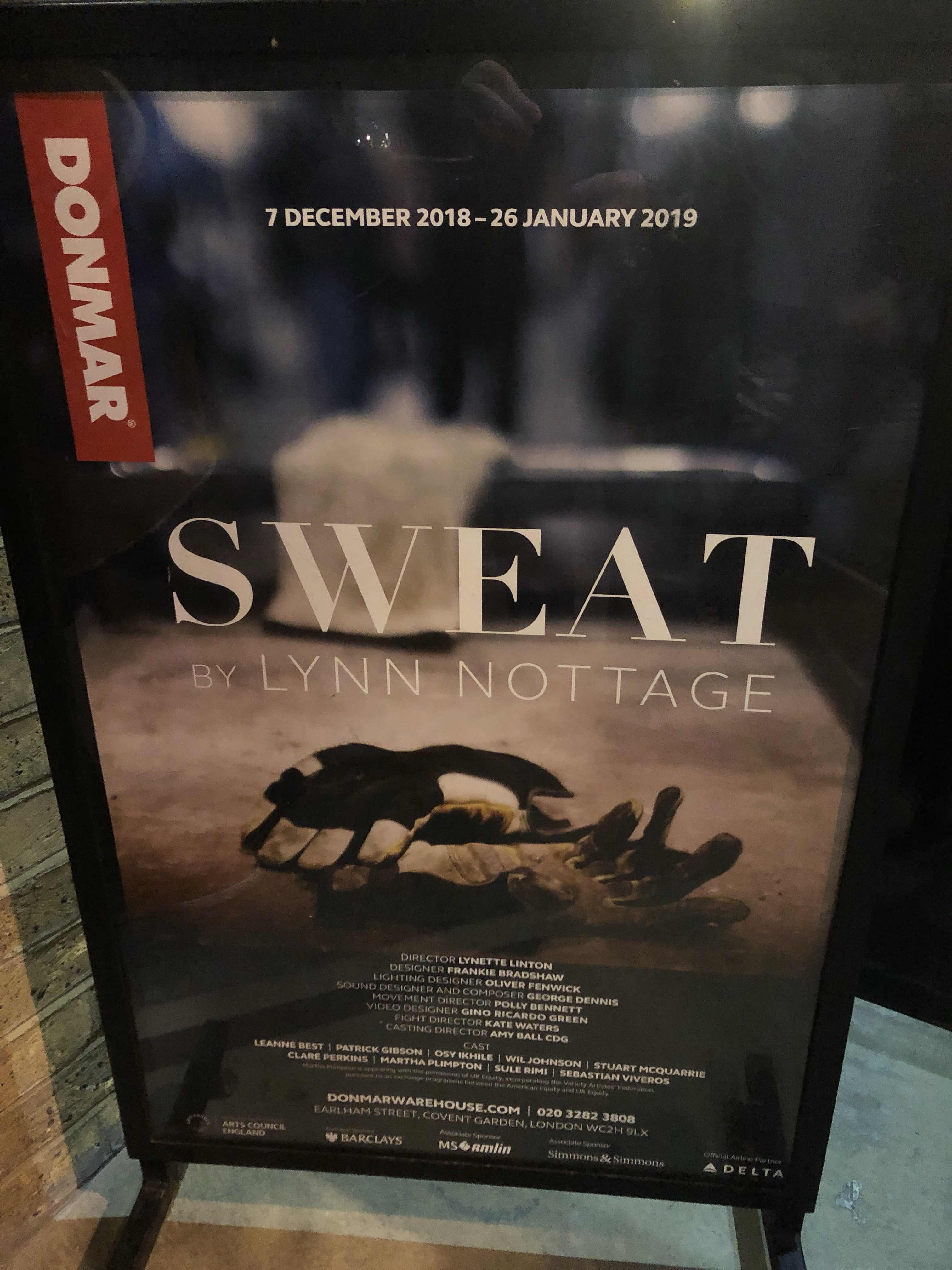 Sweat is a masterpiece, and no wonder, Nottage is a master detailer of the lives of the dispossessed. And don't just take my word for it, she won her second Pulitzer Prize for Sweat. And Lynette Linton's superbly calibrated production excels from start to finish. Outstanding.

By turns Sweat is profound, terrifying, earthy and witty, it details the decline of the town, and people, of Reading, Pennsylvania, a once-proud manufacturing hub and furnace of the American Dream. And although things might be set in the so-called American rust-belt it speaks so powerfully to our Brexit-riven, food bank-strewn country, frightened as we are of the future, the 'other' and the decline of social structures we have always taken for granted. Reading’s particular problems lie with the encroachment of automation and collapse of industry, in a fierce place that used to guarantee blue collar jobs for life, 'in the mill' and ‘in the plant’, straight out of high school.

So what happens when three generations of certainty and security crumble overnight? Nottage explores these issues along with how class, race and the dignity of labour can lead to answers that should shame and scare us all.

Sweat was born out of two years that Nottage spent visiting the hollowed out post-industrial America. But her warm, intimate, polemic-free account of a small group of friends whose fortunes drastically decline between 2000 and 2008 has clear and present parallels with our own country too.

Cynthia (Clare Perkins) and Tracey (Martha Plimpton): two tough, funny, middle-aged women who have spent their lives on the floor of a local, family-run steel-tube factory, and have been rewarded for it with decent pay and a sense of security. Only change is coming. And Cynthisa and Tracey's sons Jason (Patrick Gibson) and Chris (Osy Ikhile) are caught in the cross-hairs.

Firstly, Cynthia gets promoted over Tracey, who then feels her back friend has being favoured for reasons of political correctness. That is just the overture, as the factory bosses are contemplating action that is much more drastic. Pay cuts, jobs cuts, strikes, 'scabs', and violence follows.

There are two devastating takeaways from Sweat. One, the childlike faith the protagonists have that the factory will look after them, an almost pathetic belief in capitalism’s conscience. And two, the speed at which a society can collapse.

Sweat is a thesis on the decline of the working class in the twenty-first century. It’s also a great story, with great characters..

The cast is fantastic across the board, though it is worth noting that guesting US star Martha Plimpton absolutely earns her plane ticket. Her Tracey is wild, fierce and desperately vulnerable, the order of the factory protecting her from her worst instincts. Perkins as Cynthia – loud and decent – is the show’s beating heart. And Stuart McQuarrie gives a lovely turn as intensely likeable barman Stan, a retired factory guy. Injured by a dodgy machine, he’s settled into a sort of Sam-from-‘Cheers’ role, a lovable American archetype.

Their fates and Nottage’s analysis are bleak, but her respect for her characters is palpable. She is never needlessly cruel to them, and we see their decline only briefly. It is society that is cruel – Sweat only reflects it, and we need to pay attention.
Posted by overyourhead at Monday, January 21, 2019