Manon "From giddiness to despair, triumph to regret, this production is searingly powerful"; @ENBallet 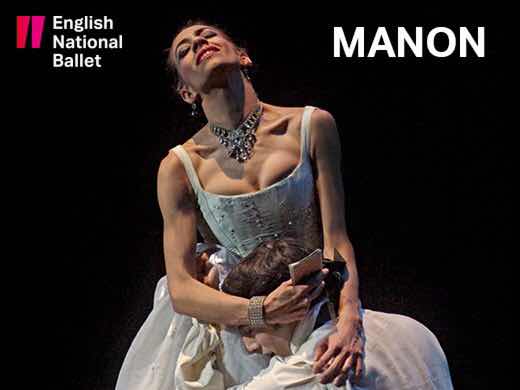 Last night Stuart and I went to see, thanks to Mark, a working stage rehearsal of Kenneth MacMillan’s Manon by the English National Ballet at the London Coliseum in London's glitzy West End.


Though the succulent depravity of the ballet has been a little anaesthetised, it still has the power to shock. We know this as the sign at the door says, "This performance contains scenes of a sexual nature, one gun shot and dry ice." So we know this production of Kenneth MacMillan’s Manon will still be skimming across a lake of darkness before plunging into its tragic depths.

The Abbe Prevost’s story of a girl whose fear of poverty overwhelms the dictates of her heart finds a perfect expression in this uncompromising and shocking ballet. It starts in 18th Century Paris and ends in a Louisiana swamp. In between, MacMillan treats us to a catalogue of sexual degradation, female exploitation and murder. From the get-go, the bustling crowd scenes depict a society in chaos where thieves and vagabonds collide with slumming aristocrats.

Here our Manon (played wonderfully by Alina Cojocaru) shifts from girlish coquettishness – jittering across the stage en pointe, side-eyeing her suitor Des Grieux (played by Joseph Caley), fingers dancing like butterflies – to post-coital succulence in the second pas de deux, sliding from the bed like mercury.

In a world where extravagant riches and abject poverty exist side by side, Manon is caught in-between. Though she has fallen in love with her penniless student Des Grieux, she is lured into becoming the mistress of a rich gentleman. From giddiness to despair, triumph to regret, this production is searingly powerful.