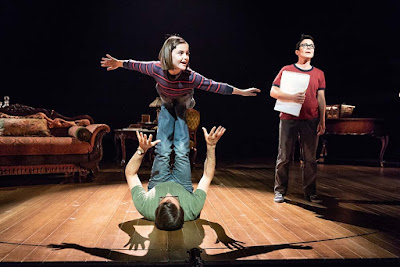 Fun Home is adapted by Lisa Kron and Jeanine Tesori from Alison Bechdel's 2006 graphic memoir of the same name. The story concerns Bechdel's discovery of her own sexuality, her relationship with her gay father, and her attempts to unlock the mysteries surrounding his life. It is the first Broadway musical with a lesbian protagonist.

The action is set in a funeral parlour with the story told as non-linear vignettes over the three ages of Alison; when she is a little girl living with her parents and two brothers, when she is first at college and coming out, and as a 42-year-old graphic artist. It is this last older incarnation that narrates and revisits the other two - sometimes just to watch and sometimes interacting with them or reliving their stories.

The show is sensational - the singing is great, the story very sweet, and the acting top notch - especially by the kids. The dad's own story whilst moving is perhaps a little over-played for my taste though. For me, things were best and funniest when they concentrated on our heroine.

Of the musical numbers the funniest were 'Come to the Fun Home' (small Alison and her brothers John and Christian perform an imaginary advertisement for the funeral home) and 'Changing My Major' (when college Alison discovers her sexuality for the first time).