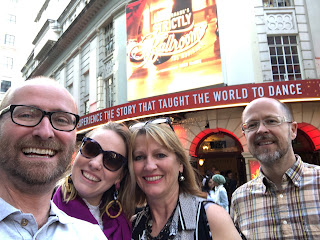 Last Saturday night my sister Joanna, niece Charlotte, Stuart and I went back to see Strictly Ballroom the Musical at the Piccadilly Theatre in London's glitzy West End.

We had been a month or so ago but due to a burst water pipe backstage the show had been cancelled just before the interval.

Again, what we saw was good if not great. It was about 80% as good as the film - the script being almost word for word the same and the Australian accents and humour largely intact.

Will Young plays a new character "Narrator" which in a show about dancing I feel was perhaps a little bit of a misstep. He wandered (and occasionally roller-skated) among the action whilst grimacing, overreacting, and commenting on the plot which was a little off-putting. We didn’t really need signposts as to what was funny. But that aside, he sang beautifully - with Time After Time being a stand out moment.

Ironically the first half (the half we had now seen twice) was the better of the two halves as the show's rather muddled quick-fire ending was a bit of a mess.

The dancing was great throughout though and the humour was all there.

Recommended - if you like a bit of a camp show and liked the film of the same name.