After spectacular views flying over the Andes we finally touched down at Santiago airport late morning. The promised mountain air turbulence "strap yourself in tightly" had luckily not materialised and we were down on the ground safe and sound.
The Andes are breathtaking and so do make sure you book a window seat if you are ever lucky enough to fly over them. 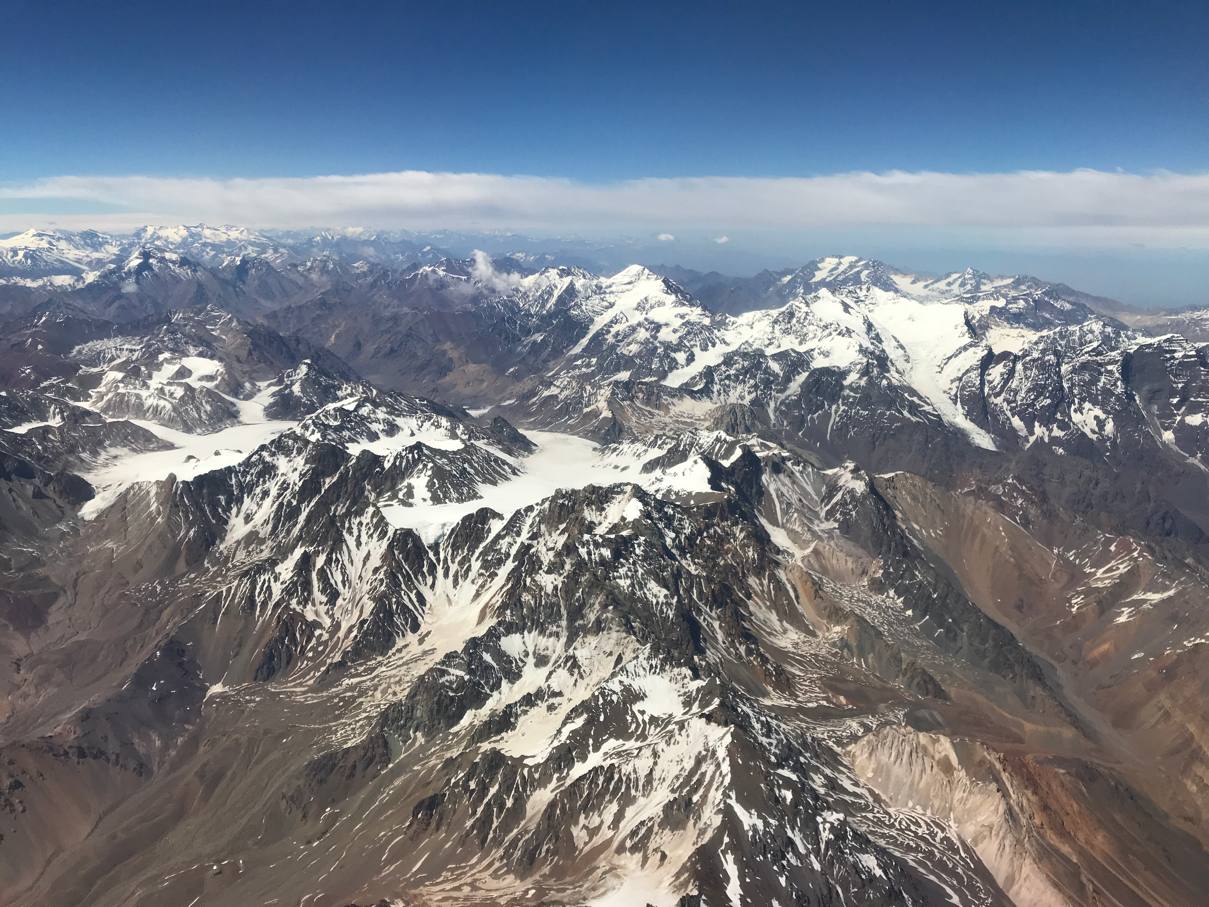 Once the aircraft doors were open we took a deep breath. We like to do that. You can often get a feel for a place by how it smells. And we could tell straightaway we were going to like this place. Our noses told us it would be fresh, warm and friendly.
The climate at this time of year in Chile is indeed warm. Very warm in fact. It's their summer time. But again, luckily for us, although today was bright and sunny, it was not too hot. Shorts and t-shirt weather. With just a smear of sunblock.
Getting through Chiliean security and customs was dead easy compared to some airports we have visited and this laid back attitude and informality was extended throughout our first day here. Friendly faces, winning smiles and happy people were everywhere. 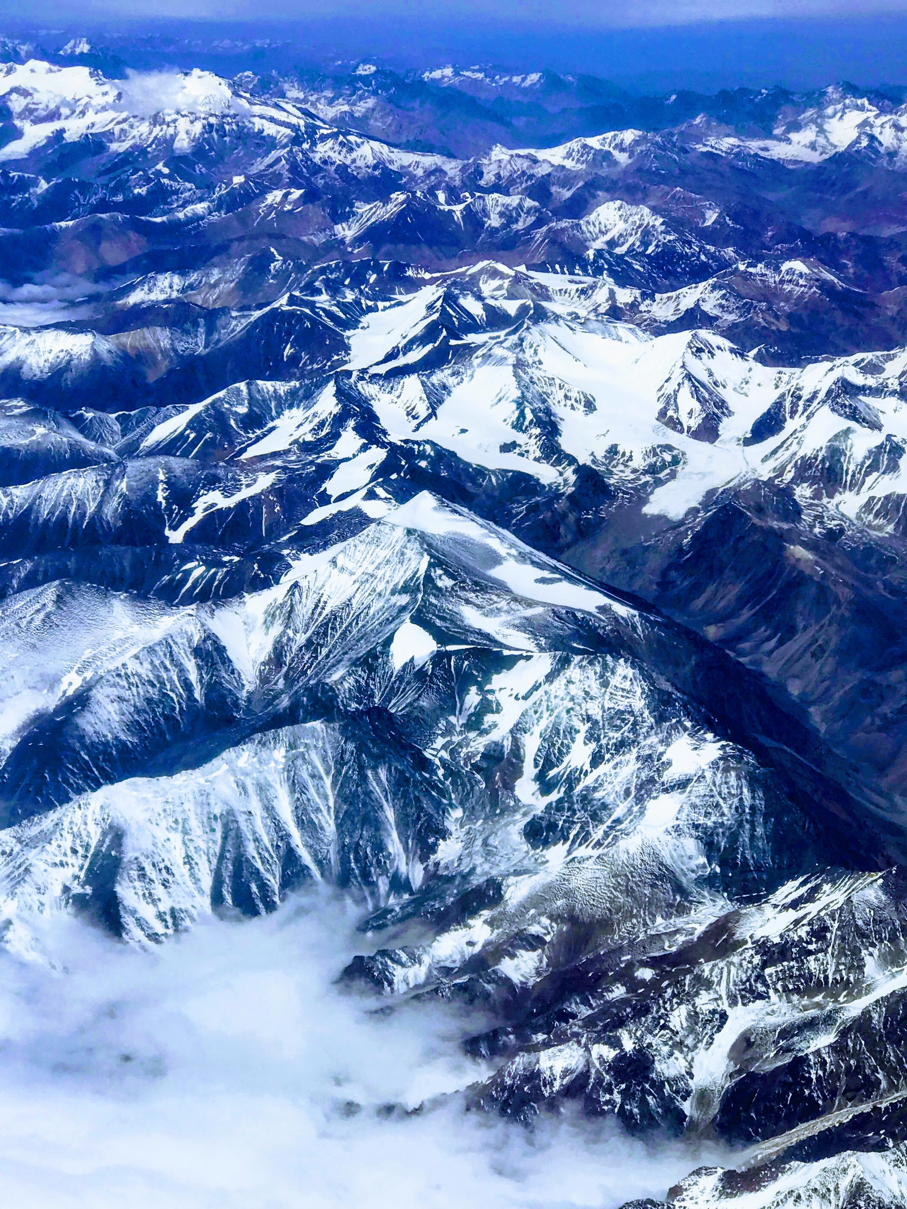 We sidestepped the usual gaggle of taxi hawkers and met our first friendly, happy, and smiling people - our driver and city guides Arial and Philippe. Before we knew it we were whisked out of the airport, in a car, along a few dual carriageways and into downtown Santiago proper.
Looking much like any European capital (Madrid? Lisbon?) Santiago was modern, open, and very green. In fact many of the trees and bushes along the roads and in the parks looked districtly familiar. Philippe explain why. Over the centuries the rich, the wealthy and the privileged had imported European plants and trees as symbols of their sophistication and importance and the flora had all but taken over. What the Spanish had done militarily the rich had done with their shrubs he quipped. 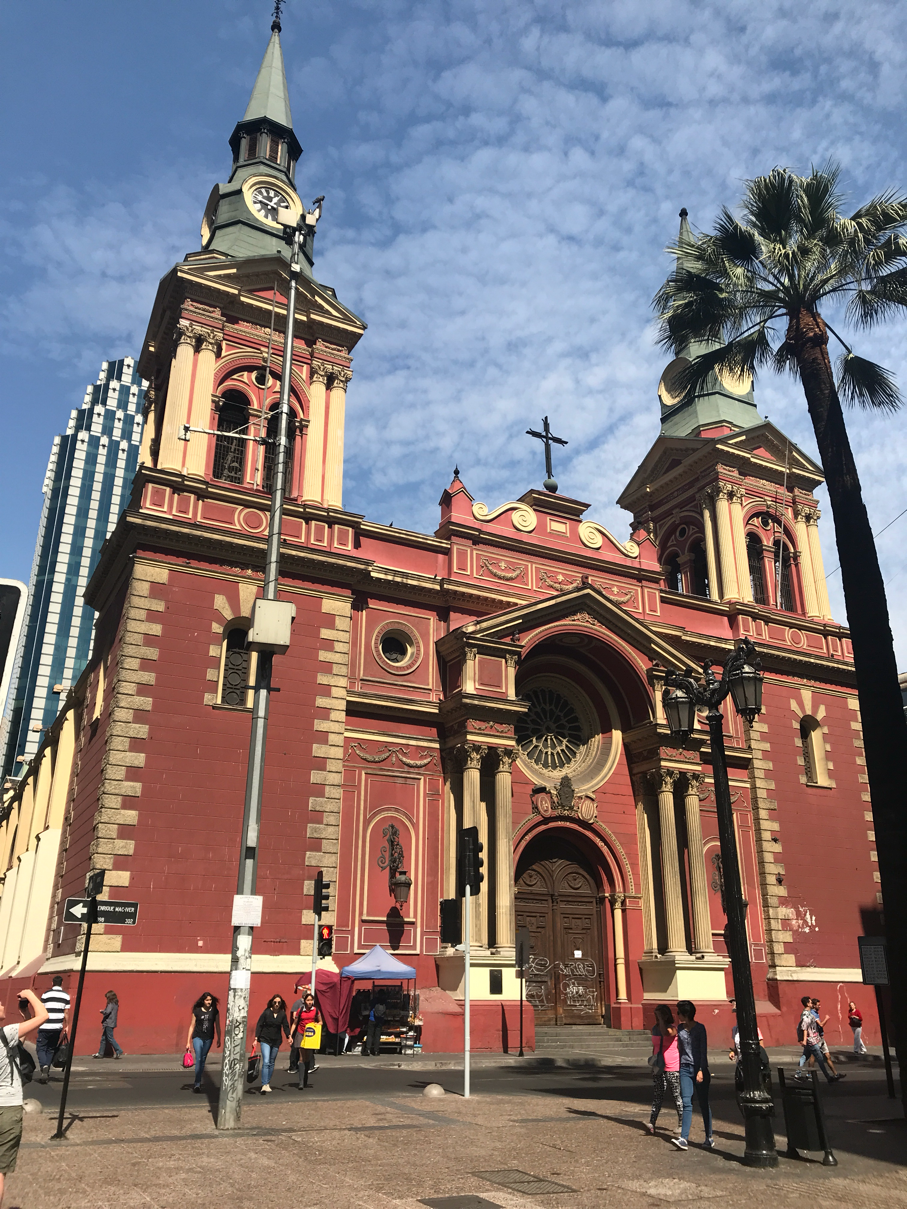 Something Santiago is rather short of however is old historical buildings. They were all turned to rubble in one or other of the massive earthquakes that regularly hit the region. So our half day city tour had a distinctly modern feel to it - shiney new glass towers, beautifully laid out parks, and food. Lots of food. Which started with a trip to a neighbourhood (and quite outstanding) empanada emporium. All home-made while you wait. We had two each. Delicious. 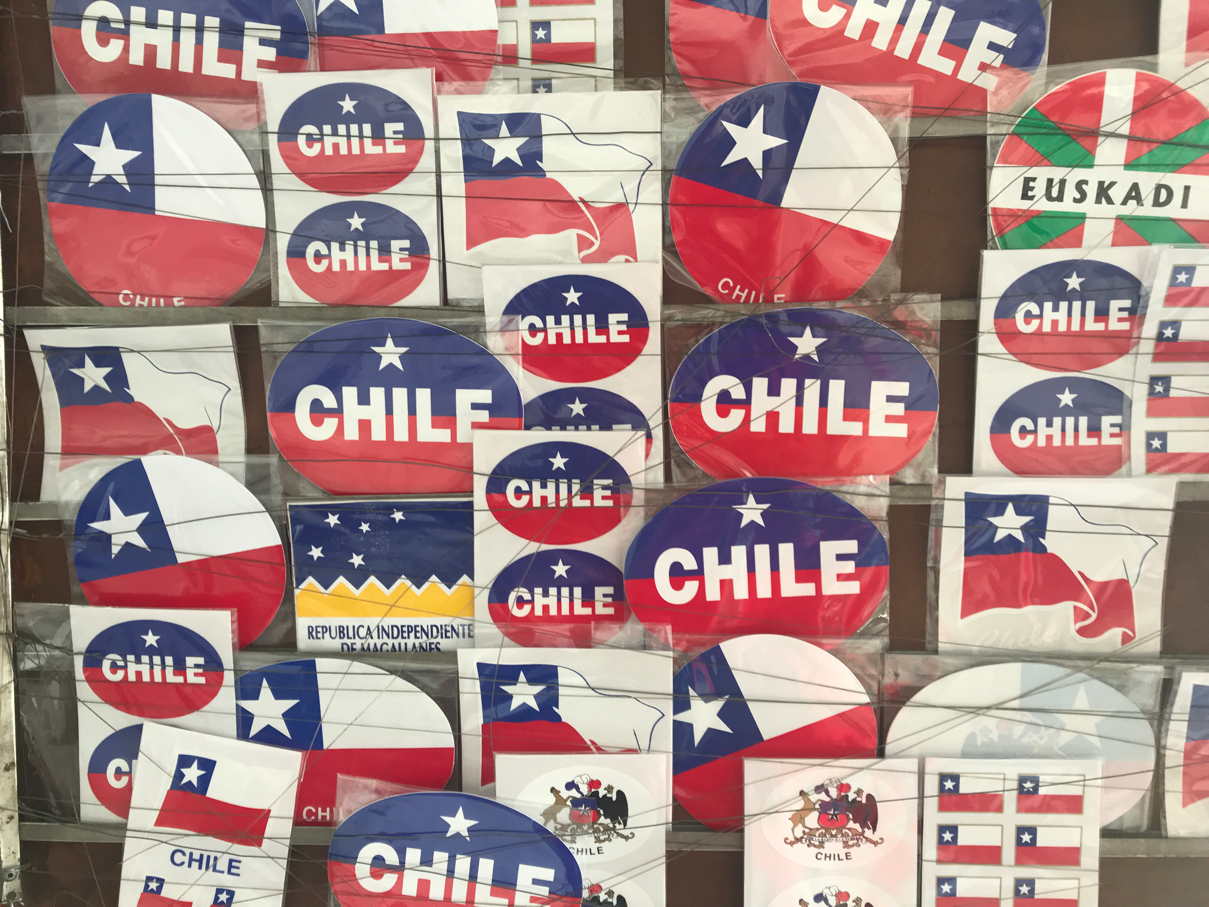 Philippe said he wanted to give us a "locals" tour so we continued on to his favourite dusty book shop where Chilean history was preserved better than any museum, to the best hot dog stall in the Southern Hemisphere, and to the public chess tables where Grand Masters are crafted. He was in full flood enthusing about his native city. This is where a famous poet was born "you really must read him", where you can buy the best dope seeds in town, where you can get the best haircut this side of the Andes. He obviously loves Santiago and all that enthusiasm was certainly rubbing off. You can even get "coffee with legs" here he said - referring rather sheepishly - to the unique Santiago tradition of coffee shops with blacked out windows and leggy waitresses in miniskirts. We settled for corn, peach and syrup street vendor food instead. 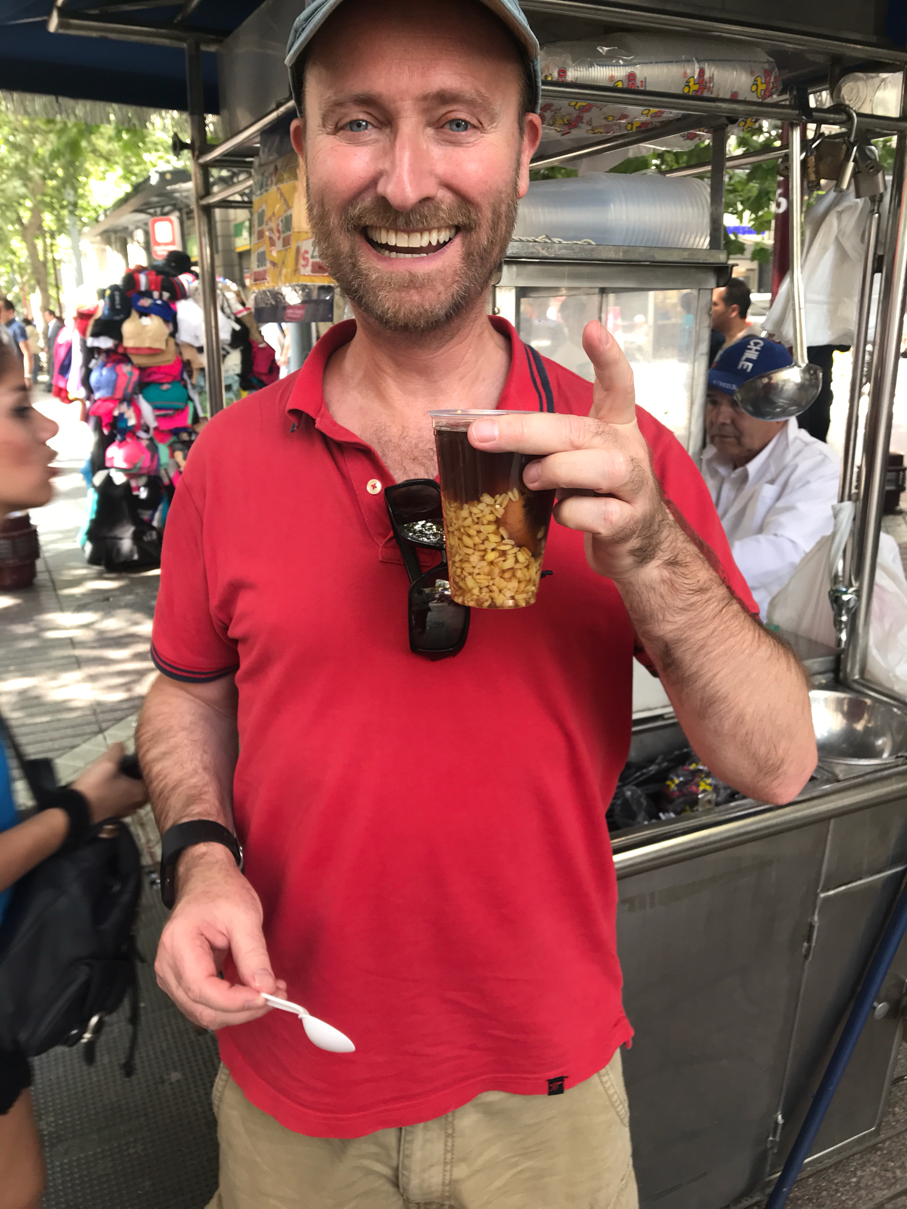 He also showed us a more policital side of his city. The water canon (nicknamed "the spitting llama") and the teargas truck (nicknamed "the skunk") were parked near the city centre on standby. Street protests are still a common feature of present local life here. Injustice, like in all cities, is rife. The rich live up the hill, the poor down in the valley.
Chile has had a troubled past too and we got to see were Pinochet mounted his deadly coup that saw a seventeen year dictatorship where so many got killed or simply disappeared. Very sobering. 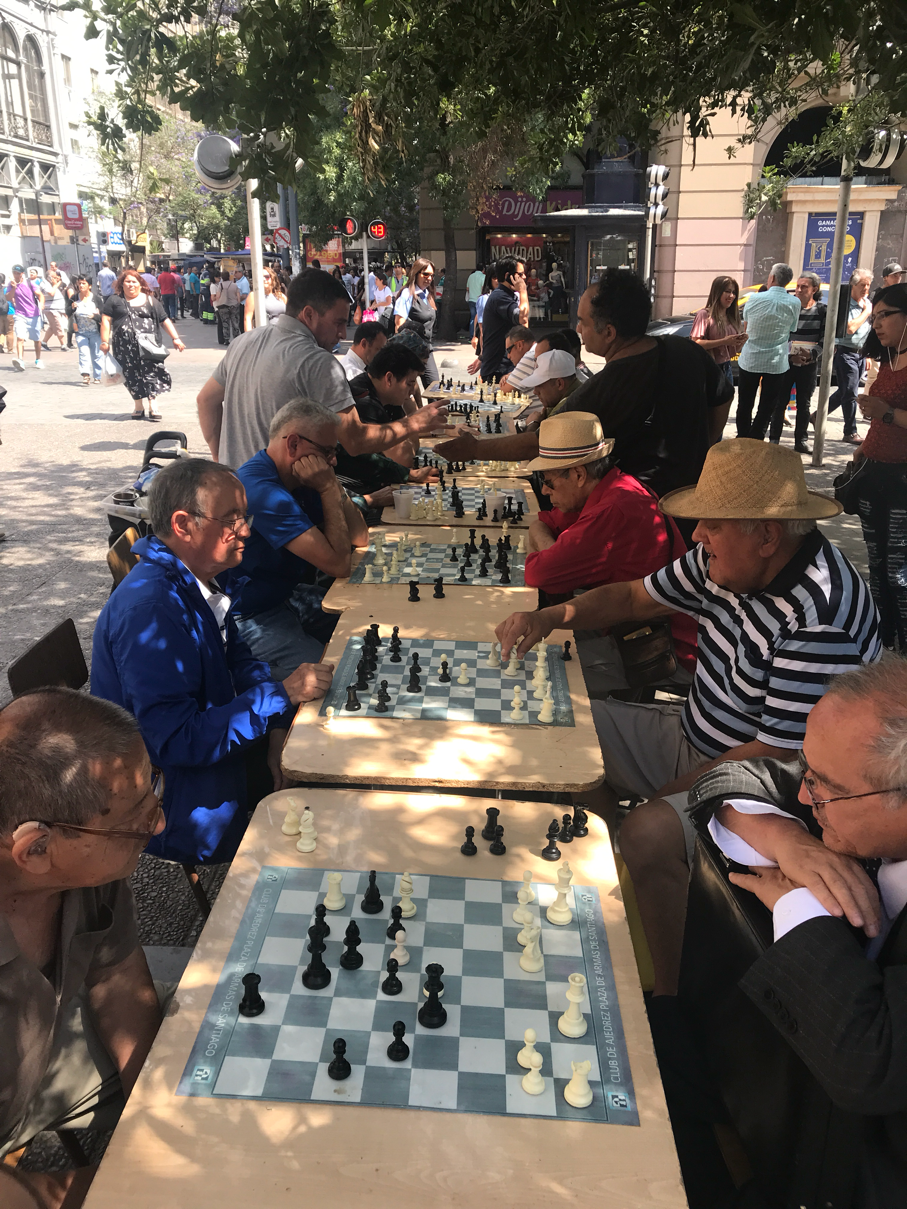 Shattered after our long flights and exhaustive tour we soon bid farewell to our guide and headed back to our hotel for some tea and a bit of a rest.
The area where we were staying turned out to be well served by excellent restaurants so later on we plumped for one to only make the schoolboy error of massively over-ordering sharing platters of meat that would have fed the five thousand. We of coursed washed the food down with some Pisco sours, the way you do in this part of the world.
After dinner we settled on a local corner bar to watch the world go by and down a few local beers. The barman doubled as a homespun DJ and made us laugh by playing us Chilean covers of Eurhythmics' Sweet Dreams, Telex's Moskow Diskow, and Trio's Da Da Da.
A suitably silly end to what had been a simply fascinating day. Posted by overyourhead at Tuesday, December 05, 2017