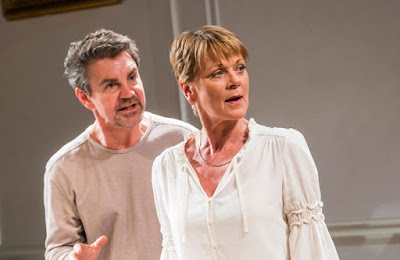 Last Saturday night Stuart and I went to see The Lie at the Menier Chocolate Factory in London's glitzy London Bridge Quarter.

Florian Zeller’s The Lie (Le Mensonge) is the most amazing night of comedy we have ever had in the theatre. But it’s not. But it is. But it isn't. And if you believe that you're believe anything. Or you won't. Because it's rubbish. No, it’s great. But it isn't.

And if you find the strategy of characters in a play making an assertion, then contradicting it, then undermining that contradiction irritating then maybe The Lie isn’t for you.

We simply hated it. We really did.

Nice to see Samantha Bond playing opposite her real-life husband Alexander Hanson but they had to cope with a dire script as translated by Christopher Hampton that sounded like it had come out of Google Translate...

They all had affairs with each other. There, you know the ending now. Save yourself the money.
Posted by overyourhead at Wednesday, November 08, 2017