Fiercely political, deeply personal, Hazel has great energy on stage and each classic song was delivered with enormous passion @Hazel_OConnor ... 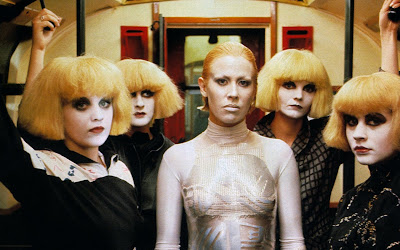 Last night Darren, Stuart and I went to see the truly wonderful Hazel O'Connor perform on her Mega Plus Tour at the Adelphi Theatre in London's glitzy West End.

The set-up was basic (no evidence of current camp Adelphi production Kinky Boots on display) but effective all the same. Hazel and her band simply performed 24 or so songs as a straightforward on stage gig for us. But what a brilliant show it was. Hey, we even got a Belle Star and a Eurythmic thrown in for good measure.

Fiercely political, deeply personal, Hazel has great energy on stage and each classic song was delivered with enormous passion.

For the last five or so songs Hazel and crew were joined by a full choir for backing vocals which was a real treat.

However, the stand out song of the night for me was a more stripped down arrangement - the stunning Snow Patrol cover of Chasing Cars. Spine-tingling.

Posted by overyourhead at Monday, November 27, 2017