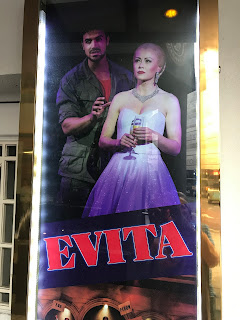 Andrew Lloyd-Weber and Tim Rice's musical masterpiece of Eva Perón's rise to fame has stood the test of time quite well although the constraints of a touring production obviously meant that the cast were perhaps not quite as thronging as I've seen in fuller productions and the set was somewhat more wobbly. That said, it was a very entertaining show that did not mess with the usual classic staging.

The plot follows the true story of Eva/Evita, the wife of former Argentine dictator Juan Perón. Documenting the journey that led her from humble beginnings to becoming the spiritual leader of the nation, the show includes a rousing score that contains some of the musical duo’s biggest numbers.

Emma Hatton's Eva was in top form as she thundered out such classics as "Buenos Aires", "I’d Be Surprisingly Good For You", and of course "Don’t Cry for Me Argentina". Gian Marco Schiaretti, meanwhile, was an effortlessly tuneful (if a little cheesy) narrator-like figure Che. However favourite of the night for us was Sarah O’Connor playing Juan Perón's mistress singing the beautiful "Another Suitcase in Another Hall".
Posted by overyourhead at Monday, August 21, 2017