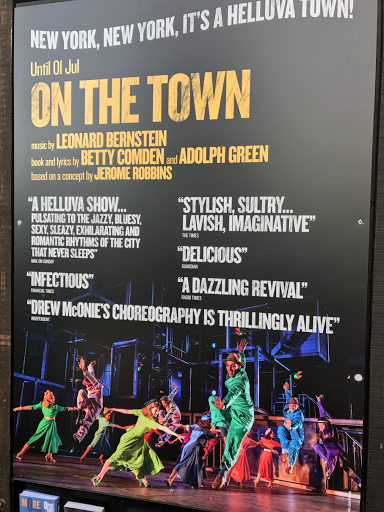 Last night Stuart and I went to see On The Town at the Open Air Theatre in London's glitzy Regent's Park.

"Sex and art don't mix. If they did, I'd have gone straight to the top!" So observes Maggie Steed's drunken singing teacher Madame Dilly. And she couldn't have been more wrong. They mix perfectly in this show.

With an impressive Leonard Bernstein score, Olivier Award-winner Drew McOnie - celebrated for his choreography on Jesus Christ Superstar - directs and choreographs On The Town, the Open Air Theatre's biggest dance musical yet.

Three US sailors have 24 hours in the Big Apple and they are all after one thing - a date for the night. Only these New York gals come with bite. Smart and sexy these women are no one-dimensional man-eaters. They know what they want, they sing, they dance and they are funny as hell.

The show is a complete wow - colourful, exuberant and slick. Maybe the songs are not as A-grade as say Bernstein's West Side Story, but any quibbles are soon forgotten as the show spins and pirouettes on. There is even a particular touching gay scene as one sailor meets his beau.

In particular, the second act with its tour of one cheesy Coney Island club after another dances the line perfectly between taking the piss and unashamedly enjoying the silliness of it all.

It you like you musicals stylish, stylised and downright show-busy - this is the show for you.